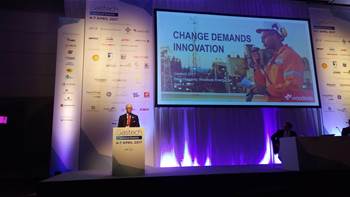 Woodside Energy is hoping that a five-year trial of humanoid robots will show they are capable of replacing people on its older manned offshore gas platforms.

Vice president of innovation capability Brian Haggerty told the Gastech conference in Tokyo yesterday that the humanoid – which is on loan from NASA – was being viewed as a potential “substitute” for humans still working offshore.

Though he did not name the platforms, this is likely to include the Goodwyn Alpha platform on the north-west shelf, which was commissioned in 1995.

Newer Woodside facilities such as its Angel gas platform are designed to be “not normally manned”, and Woodside indicated it would continue to design future platforms in such a fashion.

“Our plan is that we ultimately design our facilities for robot-only interventions and operations, and take the savings that we get out of that,” Haggerty said.

“Our way of designing going forward is that we’re going to design it as though it’s operating on Mars.”

While this works for newer operations, the company also wants to apply the thinking to existing operations, and that is where technology like humanoid robotics and its cognitive data science efforts could assist.

Woodside has previously said the humanoid robots will interact with the company’s “cognitive science technology”, which – among other things – captures decades of institutional knowledge and documentation.

It is now much clearer how the robots might use this knowledge if they become the new frontline for inspection and maintenance on previously-manned gas platforms off the Australian coast.

“We’ve developed ‘normally unmanned’ platforms, we’ve had good success with it, and we’ve gotten to a point of being confident about the reliability of the operations on all the unmanned platforms,” Haggerty said.

“We’re looking at the moment at de-manning our current manned platforms and we believe the robots will be able to help us a lot in that space.

“Because [these platforms were] originally designed as manned facilities, to actually take people off [them] you need a bit of a substitute.

“You need the robots to help us do inspections and look at things that are put in awkward places that you can’t monitor. That’s our plan and we’re experimenting with that.”

Woodside has previously couched the humanoid trial in more vague terms, indicating its project would examine “how the robotic technology could be used to improve safety, reliability and efficiency in the high-risk and remote environments where Woodside operates".

The company said it has earmarked around 300 tasks across its operations that the robots could be put to work on.