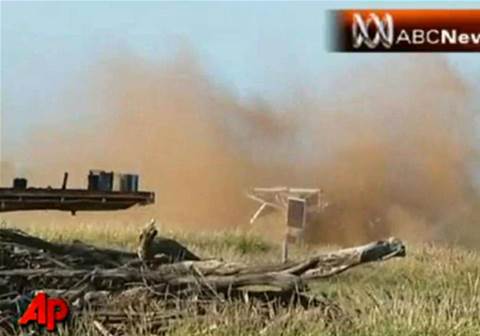 A NASA balloon carrying a multi-million dollar telescope destroyed a car in Alice Springs, Australia after it failed to launch properly.

The balloon was being launched in the Australian Outback and broke free from its moorings just before release. The capsule underneath, containing the University of California, Berkeley's Nuclear Compton Telescope (NCT), flew across the site, smashing into a parked car before jumping over a second and then crashing to the ground.


"We were sitting in our car and preparing to move it out of the way and we were actually about a foot [away] of being wiped out," local resident Betty Davies told ABC Australia.

"I think if it had hadn't have been for the other gentleman's car being there we'd have been somewhere else by now. We were expecting to be wiped out."

No-one was hurt in the incident said the director of the Balloon Launching Centre, Professor Ravi Sood, but the scientists behind the NASA project were distraught.

"Ballooning, that's the way it happens on occasions but it is very, very disappointing. Gut-wrenching actually," he said.

Got a news tip for our journalists? Share it with us anonymously here.
Copyright ©v3.co.uk
Tags:
alice balloon car nasa oddware spings
By Iain Thomson
Apr 30 2010
11:06AM