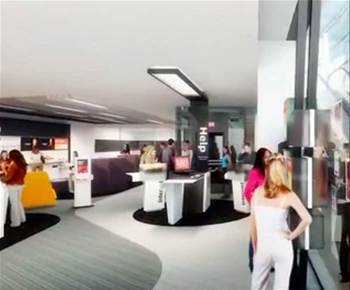 Inside the NAB branch of the future (courtesy of NAB).

NAB is offering free wi-fi, iPads and Macs in its flagship Docklands branch in an attempt to encourage passers-by and non-customers to use its financial products.

The bank opened a concept retail store at 800 Bourke Street in Melbourne yesterday.

Successful design elements could be replicated in another four retail sites from March or April, and potentially across the NAB branch network.

An NAB spokeswoman told iTnews that 800 Bourke Street had two iPad devices and two Macs for public use. Their use was "not locked to just NAB-related activity," she said.

In addition, the building is a wireless hotspot backed by Telstra. Internet access is largely unrestricted, she said.

The bank's head of retailing transformation Matt Sale told iTnews that the free wi-fi could serve as an "attract mechanism".

"Our existing customer utilisation of our stores is declining naturally - not dramatically - but obviously consumers are choosing to do certain things through online and other channels and we want to encourage that," Sale said.

"[However], there's still an expectation that a physical presence exists in a convenient place for most consumers. As a bank we have to think differently about what we do with and how we use that channel.

"Part of it needs to be about how do we use it to attract people who don't bank with us and appeal to the passer by. The free wi-fi is just one of the things we're trying to do that."

Sale said the bank's decision to offer Macs and iPads in-store was "not an easy choice" and that it was "consumer-led".

He said NAB had researched device utilisation and ease-of-use before settling on Apple devices.

"We also considered options around more traditional touch screen interfaces but we found that the user experience through testing was clunkier and that people preferred the iPad," he said.

The 800 Bourke Street branch has also been fitted with digital signage. One screen acts as a "community noticeboard" that anyone can upload messages to.

In the future, signage may also be used to personalise messages and experiences for customers and visitors to branches.

Sale said that NAB may also use technology in future branches to "understand foot traffic" in the retail space - "where people go within the store, what people do when they're there and how effective each part of the store is."

"I think retailers that have physical spaces are going to have to leverage technology to become a lot sharper in how they're utilising space," he said.

"The return on square metre investment is going to become more challenging as sales through other channels grow.

"We need to sweat our physical asset harder."

Sale said NAB planned to evaluate the success of various elements of its concept retail branch through customer feedback and qualitative testing "over the next couple of months".