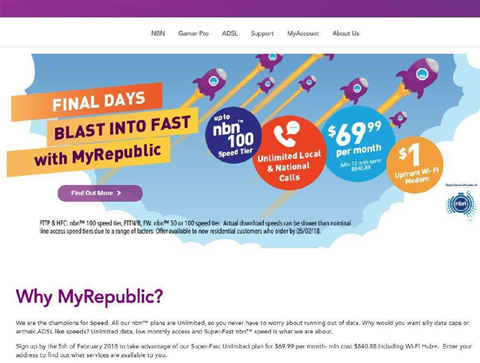 An offending piece of marketing.

Internet provider MyRepublic has been stung $25,200 over the fine print on its NBN-based plans.

The company is the latest NBN retail service provider to be fined by the Australian Competition and Consumer Commission (ACCC) over the way NBN plans were marketed.

In this case, the ACCC took exception with “fine print disclaimers” on NBN50 and NBN100 speed tier products.

The commission said it considered them “ineffective as they were not prominent and did not provide clear information.”

“We were concerned that MyRepublic’s use of the NBN speed tiers misled consumers to believe they would get broadband speeds of, or close to, 100Mbps and 50Mbps during all or almost all of the time, when that wasn’t the case,” ACCC commissioner Sarah Court said in a statement.

“When choosing between broadband services, consumers need accurate information about the performance they should expect, particularly during busy periods.

“We’ve been very clear with broadband providers about this and reference to the NBN speed tiers alone is not sufficient.”

Most NBN RSPs comply with a set of marketing guidelines for NBN services that the ACCC created in August last year.

The degree to which they all comply is set to be tested later this year when the efficacy of the guidelines are reviewed.

While many RSPs publish a typical speed that users might expect to see in the busiest time of the day, others simply say that speeds on all NBN services are “variable” and that the actual speed experienced depends on a number of factors.

Whereas most RSPs that market NBN service speeds as "variable" display that prominently near the plan price, MyRepublic said only in the fine print "actual download speeds can be slower than nominal line access speed tiers due to a range of factors".

Those that publish typical speeds have been in a race to publish higher and higher figures this year, although iTnews reported last week that this has levelled off somewhat with speed standards emerging on the NBN50 and NBN100 tiers.

Many other RSPs have been fined by the ACCC over a different issue, whereby NBN users were sold internet plans at speeds that their lines were physically incapable of achieving.