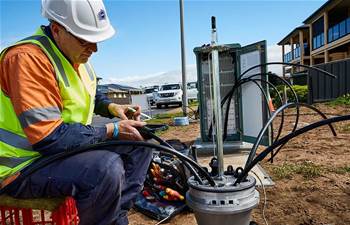 NBN Co’s retail service providers are starting to standardise their typical evening peak speeds at 46Mbps on the NBN50 tier and 80Mbps on the NBN100 tier.

NBN Co’s new bundled price construct, which includes an above-average amount of connectivity virtual circuit bandwidth per user, is clearly having an impact on typical speeds.

There was an almost universal improvement in the typical evening peak speeds seen by NBN50 users, with a number of large RSPs reporting a 2-3Mbps jump compared to when iTnews last analysed the speed numbers in late April.

The new price construct came into effect in June.

The effective standardisation on 46Mbps (out of a maximum 50Mbps) in the evening peak means NBN50 customers would be seeing no less than 92 percent of their top speeds throughout the day.

(There are, of course, a number of variables that could affect that for individual users, but the typical speeds are intended to be broad-brush in their application, acting as a useful guide for prospective purchasers).

iTnews’ analysis shows iiNet, TPG, Aussie Broadband, Westnet, Dodo and iPrimus are all reporting NBN50 speeds at or close to this new standard.

At the NBN100 tier, the changes are more pronounced with some RSPs starting to back away from the speed race that has occurred around the reporting of typical speeds for much of this year.

It is clear that most major RSPs now see 80Mbps as a yardstick for typical evening peak speeds on an NBN100 plan.

Only Exetel and Aussie Broadband are now reporting typical NBN100 speeds above this mark.

Interestingly, the TPG-owned brands iiNet, Internode and Westnet backed off on their typical evening peak speeds in the NBN100 tier, in some cases significantly - Internode dropped from 87.4Mbps down to 80.5Mbps in the space of two months.