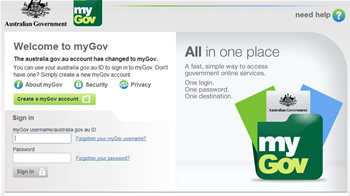 Citizens locked out of lodgements.

The nation's single sign-on portal for access to government services has been plagued with technical issues during its first week in operation as the exclusive thoroughfare for online tax returns.

Earlier this year the Australian Tax Office confirmed Australians would need to sign up for a myGov account in order to lodge tax returns online from July 1, despite previously raised concerns around the system's security.

The service counted around two million users earlier in the year, a user base that was expected to double in size as citizens register to lodge their tax returns for the 2013 financial year.

The Tax Office today advised of an "error 5077" with the system, which was preventing users from lodging their tax returns and accessing their accounts.

Users have been complaining of intermittent issues with the service since yesterday.

The Tax Office hinted in a Facebook post the technical issues were associated with "errors with the authentication process", meaning users had difficulty verifiying their identity, and advised against repeated attempts.

"After several unsuccessful attempts to verify your identity your account is locked for 24 hours as a security precaution. We apologise for the inconvenience this has caused."

The Department of Human Services said a "record" number of new users were signing up for the service.

"We have been working hard to resolve the intermittent issues with myGov and most customers will today notice an improvement in the service," it said in a Facebook post.

"A record number of you are registering for myGov, so we’ll be keeping a close eye on the service today and our technical specialists will keep working hard to fix any ongoing problems."

The ATO said it was aware less than one percent of users were experiencing the ongoing technical issues. A spokesperson said 15,705 people had lodged their tax return online since Tuesday.

"We are now working to further reduce the instances of this issue. Those experiencing this problem can call the e-tax IT help desk on 1300 1300 17," the spokesperson said.