MyGov gets a makeover 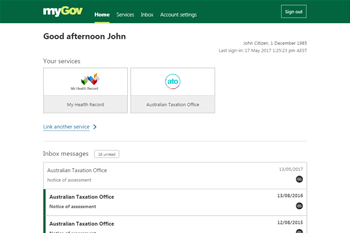 The federal government has delivered a promised facelift to its myGov government services portal in an effort to make it easier to use.

MyGov operator the Department of Human Services teamed up with the Digital Transformation Agency and the Australian Taxation Office to deliver the revamped site.

The DTA did the discovery and alpha phases solo, while the ATO stepped in to help DHS out with the prototype stage and then the beta product. The ATO is one of ten agencies to provide services through myGov.

Ministers Alan Tudge and Angus Taylor had promised the revamp in December as part of an 18-month digital agenda.

DHS claims the number of daily logins to the platform from myGov's ten million users has doubled to 242,000 in the last two years.

But users reported struggling to find the services they needed, as well as difficulty understanding instructions on how to use the site because of convoluted language and an excessive amount of information.

They also said it was too easy to get locked out of the site if you forgot your sign-in details, and suggested myGov be more identifiable as a trusted government site.

In response, over the past year the agencies expanded myGov's sign-in process from just alphanumeric username codes to include options for email or mobile numbers, and tweaked it to show passwords as they are typed to cut down on high failure rates.

The changes culminated in today's release of the new-look portal, which the government says offers simpler navigation and better usability on mobile devices, as well as the ability for users to unlock their own suspended accounts.

Content has also been rewritten to be clearer and simpler, and the amount of information has been reduced.

The agencies will now undertake four weeks of user research to see whether the changes have been successful, and if not, act quickly to respond to "unforeseen events or user needs".

“We listened and we got it," Taylor said in a statement.