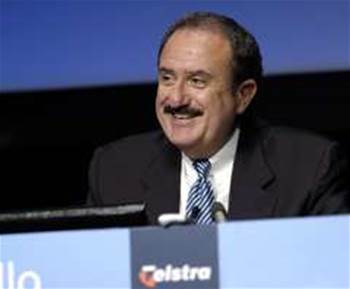 Telstra chief executive Sol Trujillo has called on the Australian Government to provide clarity on how much radio spectrum might be opened up to advance the local mobile broadband industry.

Speaking to iTNews at Mobile World Congress, Trujillo backed the GSMA's international drive to convince governments to allocate the largest amount of bandwidth possible to mobile broadband once analogue television networks are switched off at the 700MHz band.

"There is a need to reallocate more spectrum in Australia," Trujillo said, "for all the players, not just Telstra, but everybody.

"It would be good for all the operators that are planning their capital investments and planning how they'll evolve [to next generation networks] to have some clarity this year."

Telstra is in a better position than most when it comes to mobile broadband.

The carrier's investments in HSPA+ gives Telstra some breathing space in performance terms before it would have to counter competitors adopting the next generation of mobile networks, based on the Long Term Evolution (LTE) standard.

LTE, which promises mobile networks capable of delivering peak download rates of anywhere between 100-300Mbps, is currently being adopted by Verizon in the United States and Teria Sonera in Scandinavia, among others.

Telstra is expected to eventually follow their lead but LTE requires wider bands in order to deliver its promised performance gains.

Whereas 3G spectrum was auctioned off in chunks of 5MHz to 10MHz, "you need to really have more than 10MHz [per carrier network] to take advantage of LTE," explains Telstra chief technology officer, Hugh Bradlow.

"The number of bits per Hz you get from HSPA+ is roughly the same as LTE. So there is no great efficiency from doing LTE with only 10MHz [of spectrum]. But if you have 15 or 20MHz, the economics work in your favour."

The two globalised bands being promoted for LTE are 2.6GHz (for capacity) and 700Mhz (for coverage).

In Australia, a nation that has been slow to adopt digital television, the 700MHz band is tied up with analogue TV networks that are not due to be switched off until 2013.

Telstra is hoping to convince the Government that at least 100MHz of this spectrum should be opened up for mobile broadband.

"There are different ways you can use that frequency," says Bradlow.

Should the full 100MHz be allocated, at least two of three interested carriers could potentially gain access to 2 x 20MHz of bandwidth, with another, perhaps, holding 2 x 10MHz.

Any less, Bradlow said, and Australia will either end up with one carrier offering a far higher level of service available via LTE than its competitors (a potential competition issue), or multiple carriers holding such little spectrum that the new network would offer only marginally better performance than existing 3G networks.

Bradlow describes ACMA as being in a "listening" and "consultative" mode on the spectrum issue to date.

"They are receptive to the discussion," he said.

More spectrum, but at the right price please
There is one minor issue that may complicate Telstra's lobbying efforts: While the carrier is keen on more spectrum to be allocated, it is reticent to pay too much for it.

Trujillo says he hopes the world has learnt a lesson from the massively inflated prices paid globally during 3G spectrum auctions.

The prices set for many of these auctions saw several 3G operators fail to profit from the exercise. These carriers were unable to offer mobile broadband services at affordable prices.

Interestingly, says Trujillo, it is developing economies such as Africa and India that might potentially 'leapfrog' the developed world on mobile services by taking the opposite approach.

"Their governments allocated spectrum and allocated licenses, but they didn't go through this auction process," he said.

"The cost to deliver services without the cost of spectrum allows the economics to work better, which allows the services to be provided at much better price points than when you have to pay ransoms."

Telstra would be very fortunate to avoid such a 'ransom'.

An Australian Government that has already spent its coffers on economic stimulus packages would clearly be excited by the prospect of using spectrum auctions to help balance the books.

"We'd just like to see an organised and decisive process where everybody can play fairly," Trujillo said.