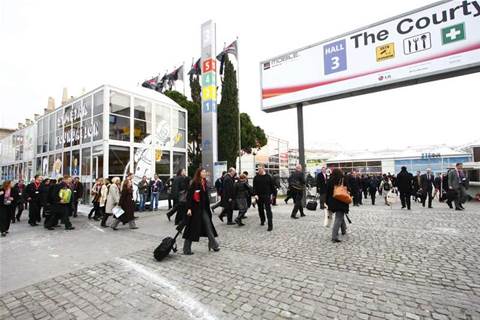 Summarising the technology trends at a gathering of the sheer scale of Mobile World Congress, with its 47,000 attendees and plethora of new products, is no walk in the park. But a handful of new applications and network technologies have captured the imagination here in Barcelona.

iTNews editor Brett Winterford caught up with Telstra chief technology officer Hugh Bradlow and Optus consumer managing director Michael Smith to discuss what new technologies they see as having a future in the Australian context.

On the device side, the must-have feature touted by just about every mobile phone manufacturer is the 'touch' interface.

Samsung made a big splash at the show with three new touch models - a HD-TV version of its OMNIA device, two new BEAT music phones, and a solar-powered 'Blue Earth' device.

Sony Ericsson meanwhile, showed off phones that combine the vendor's strengths in both music (Walkman) and imaging (cybershot) - the upcoming idou model combining both with a new touch interface.

"In the current economic climate, I find it strange that these are the only devices we are hearing about," he said. "Where are the entry-level devices?"

Bradlow, meanwhile, was a little underwhelmed by the lack of progress around the Mobile Internet Device (MID).

Bradlow had long predicted 2009 to be the year of the MID. But after some brief previews of the new form factor under non-disclosure agreements, he feels there is much work to be done yet.

"Unfortunately it is one of those things where practical engineering realities come into it," he said. "You wonder who to believe when you are told you can get a day of battery life out of something which just about burns your hand off!"

Accelerometers
Any existing users of high-end handsets such as the iPhone or the Nintendo Wii would be familiar with the concept of an accelerometer - a device that can measure movement, orientation or vibration.

It is the smart in the iPhone, for example, that automatically switches the device between portrait and desktop mode depending on which way you hold the phone.

One technology at Mobile World Congress that impressed both Bradlow and Smith has the potential to take these same smarts to lower end devices.

Both carriers visited the booth of Oberthur Technologies, a company that has baked device-agnostic accelerometer technology into a SIM card.

This enables all kinds of handheld devices to feature accelerometer functions with very little additional cost.

"You can put one of these SIMs in a legacy phone, and then write apps on what is called SIM toolkits for different scenarios," explains Bradlow.

Applications might include having calls automatically divert when the phone is face down on a surface (for when executives are in meetings) or when the user makes some kind of gesture or movement with the device.

"That's a technology where somebody has created an opportunity, and we as carriers wonder what can we do with that opportunity," Bradlow said.

Speech-to-text
Both Smith and Bradlow also cited speech-to-text as an application that would prove popular in the Australian market.

Speech-to-text can be used to translate voice messages into SMS or to update blogs on the fly.

Telstra is already trialling the voice-to-text technology of SpinVox, a vendor that specialises in translating voicemails into text messages. Optus also has some as-yet unannounced plans in motion.

"I think there is a huge opportunity - people are starting to use voice recognition in a way that doesn't require the user to change their behaviours, but enhances their workflow," Bradlow said.

"You're in a meeting, for example, so it is inappropriate to haul out your phone and listen to a voicemail," he said.

"A call comes in, you let it go to voicemail and take a quick look and get the gist of the message from an SMS.  I find now that I listen to one in ten voicemails, because I'd rather view them as a text."

Generation Y, he suggests, don't even listen to voicemail messages, and will also warm to the idea of receiving voice messages as text.

Telstra is expected to make a formal announcement around its voice-to-text offerings later today in Australia.