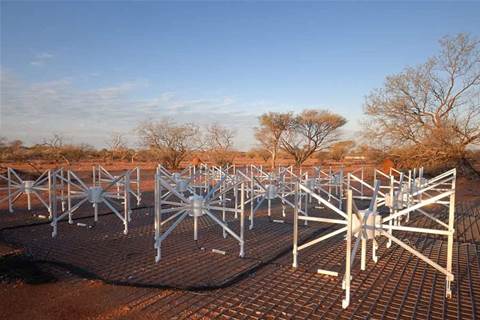 The international Murchison Widefield Array (MWA) Consortium has purchased a new IBM computing cluster to process some 50TB of data a day from radio telescopes in the Australian outback.

The 24-node cluster will be set up at the Murchison Radio Observatory, some 700 kilometres north of Perth, to serve the MWA, which is one of Australia's contributions to the international Square Kilometre Array (SKA) project.

It replaces MWA's custom field programmable grid array (FPGA) hardware and is expected to convert radio signals from the $51 million radio antenna array into wide-field images of the sky.

The hardware will be distributed across two racks, while a 10Gbps switch routes data from the array's 4,096 dipole antennas to the GPUs for processing.

“We run bespoke pieces of GPU code on the NVIDIA GPUs, reaching an efficiency of eighty per cent,” he told iTnews, noting that it was a very high rate for GPU processing.

After signal data is processed, it is sent to the Pawsey Centre in Perth and made available to astronomers from around the world. The link to Perth will run at 10Gbps, to handle the large data volumes.

Tingay expected the MWA data to be used by about 100 to 150 scientists initially. He said the data could eventually be used by up to 1000 astronomers or ten percent of the world’s researchers in that field.

Tingay valued the IBM cluster at $850,000 but would not reveal how much the MWA actually paid for the machine, citing commercial confidentiality.

He said the new cluster would be much more flexible and energy-efficient than MWA's FPGA set-up. “We can change things easily simply by running a different executable,” he said, explaining that the FPGA hardware required reconfiguring.

The MWA cluster is expected to consume 10kW to 20kW of power. The site is currently powered by diesel generators, but Tingay said greener energy sources such as solar would be established as part of the CSIRO-sponsored infrastructure build for the radio telescope.