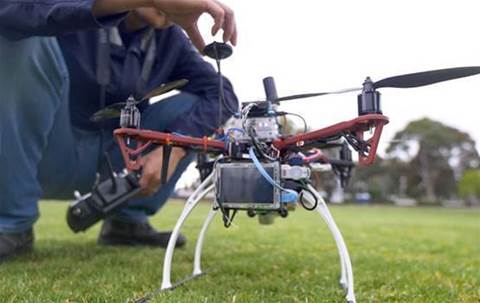 Engineers from Monash University are developing autonomous drones able to detect moisture hiding just under the surface to help meet our growing demand for food as water sources dwindle.

While Geoscience Australia is fine-tuning the process of using satellite imagery to hunt down water thieves, Monash is working on a smaller scale to help farmers better understand the moisture content of paddocks at a more granular level.

The team, led by Monash’s head of Civil Engineering professor Jeff Walker, has been developing the autonomous system over the last two years.

Walker said the drone is autonomous “in the sense that you mark the paddock you want to fly, it automatically prepares the flight lines...you press the ‘fly’ button, it goes and flies and captures and comes back and lands”.

An early proof-of-concept was originally equipped with optical mapping sensors, but the project has now expanded to include passive microwave sensing technology using L-Band waves (an Institute of Electrical and Electronics Engineers designation for radio wave between one and two gigahertz).

While L-Band waves give a better indication of soil moisture beneath the surface than the visible spectrum, Walker and his team are also exploring the potential to use P-Band waves, which are expected to be able to measure 15cm beneath the ground, irrespective of ground cover or ‘tillage features’.

It’s hoped the increased insights into how water moves through paddocks will allow farmers to optimise crop yields while reducing wastage or overwatering, which can damage the health of plants and lead to increased numbers of pests and diseases.

“We need to produce 60% more food with the same amount of land and water, and we can only achieve this by being more efficient with the water we use through irrigation,” Walker said.

“We need to know how much the crop needs, how much moisture is already there and apply just the right amounts of water in the correct places to avoid wastage while keeping the crop at its peak growth.

“At best, farmers might have a single soil moisture sensor in a paddock, but this doesn’t allow for the optimal application of water, especially as this resource becomes scarcer. Plus it won’t take into account moisture variation levels across the individual paddocks.”

Autonomous drones also have advantages over satellite imagery or scans conducted by plane or helicopter due to their significantly lower costs and ability to collect more granular data on a regular basis.

On a broader scale, soil moisture levels also impact flooding, as well as local and regional weather and climate systems. The current Queensland floods, for instance, have enough moisture to create its own weather.

A flood so vast it creates its own weather! The extra moisture from the flooding in #NWQld helped this thunderstorm form this morning. It can be seen following the path of the flood waters very closely, thankfully falls were isolated. More images: https://t.co/nrb8tKt1K1 #BigWet pic.twitter.com/zPHnElj50k

Irrigation has also been a hot topic in the Murray-Darling basin over the last few months, as mass fish die-offs spur allegations of criminal water theft and high-level mismanagement.