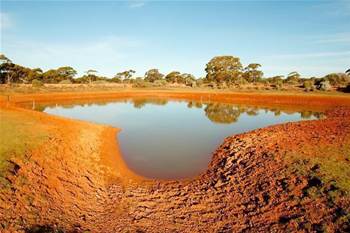 Geoscience Australia is fine-tuning an algorithm that uses satellite imagery to detect when dams are filled and drained to aid the policing of regional water management.

Earth observations scientist Claire Krause told PyCon AU 2018 over the weekend that the tool was being developed for an unnamed “government stakeholder”.

“One of our government stakeholders came to us and said ‘we really want some help. We want to know in Australia when farm storage dams are being filled and emptied’,” Krause said.

“This is a really contentious issue because of water use, particularly in areas of Australia where there isn’t maybe as much water as people want there to be.

“So they wanted to keep track of when dams are being emptied and filled so they can make sure that everybody’s doing the right thing [under local water management rules].”

The stakeholder had been working with digitised satellite images, but had a person manually mark the location of dams they could recognise by sight.

“Someone had sat there for the part of Australia that they were interested in and clicked and made a [map] of dams,” Krause said.

“The great thing about that is at least they know -  as far as that person is trained - that it’s a really good data set, but it means they didn’t quite get all the small dams and then six months later - or even two months later - if someone builds a new dam, it’s out of date.

“So we wanted to automate this.”

Krause started by running a water-detecting algorithm over the existing imagery to properly recognise all the dams.

However, she noted that the data was stored as a raster format, in which an image is composed of a grid of pixels.

“We didn’t want that because the people we deal with use ArcGIS, which means they wanted shapefiles,” she said, citing the geospatial vector data format used with that piece of software.

“So I did a lot of code munching to get a polygon data set.”

The polygon data set is created from satellite imagery using an automatic process.

“This means that anytime there’s a new satellite image - which in Australia is every 16 days though we’re moving to five days because we’ve got some new satellites the Europeans put up - we can re-run this algorithm,” she said.

“So now we have a really good handle on where the water bodies are in Australia.”

Once the dams were recognised, the next step was coding a way to monitor how the water levels in the dams behave.

Krause showed examples of dams that had been detected with the tool and the fluctations in water levels - corresponding to when the dam was drained and then refilled - over time.

“What we’re going to be doing is building a flagging system so that any time [the water level in the dam] goes up we can say, ‘Hey, were they allowed to do that at that time?’ and someone can take a better look,” she said.

“My job now is to improve this and make it better, and then pass it on to our stakeholders who deal with the implications of all of this.”