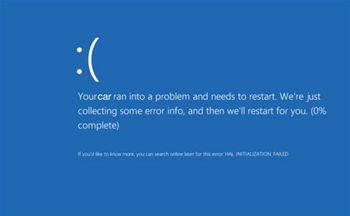 Users are reporting that computers with older processors made by Advanced Micro Devices (AMD) on board will not start up after installing a package of fixes for Windows that includes mitigations for the Meltdown and Spectre chip flaws.

The update for Windows 10 version 1709, KB4056892, provides a range of fixes and updates, and addresses security issues affecting the operating system. It is installed automatically through Windows Update.

Installing the patch appears to prevent computers with AMD Athlon 64 X2 and Sempron processors from booting into Windows, users in multiple languages are reporting.

Windows 10 becomes stuck and will not restart and enter the operating system, displaying the error code 0x800f0845.

Unless users have created a restore point for Windows, it is not possible to roll back the installation to an earlier version of the operating system without the patch installed.

Users without restore points to revert to will have to reinstall Windows 10 instead.

To avoid having their computers rendered unusable, users are advised to pause Automatic Updates until Microsoft is able to fix the issue.

The problem might extend to newer AMD Ryzen Threadripper processors, with some users reportedly experiencing start-up problems after the patch has been installed.

Microsoft said it is also aware of another issue affecting certain anti-virus products, causing Windows to crash with the infamous Blue Screen of Death (BSoD) error, after the Meltdown-Spectre patch is installed.

The Meltdown-Spectre patch will not be installed on PCs running the affected anti-virus products unless the vendor in question has added a registry value in the Windows configuration database, to show it's safe to update the system.

Update, 10/1 9.15am: Microsoft has suspended the Spectre patch after receiving reports that it will render some PCs with AMD processors unbootable. The company said it is working with AMD to devise a fix.