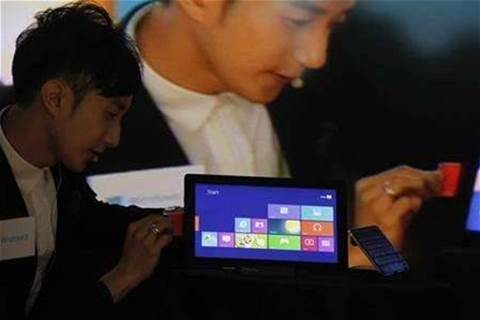 A magician performs with a tablet loaded with Microsoft's new Windows 8 during the launch of this new operating system in Hong Kong October 26, 2012. Credit: Reuters/Bobby Yip/Files

In first three days of system being available.

But Microsoft's new Surface tablet had a "modest" start to sales because of limited availability,

The world's largest software company put the Surface tablet centre stage at its Windows 8 launch event last month in its fightback against Apple and Google in the exploding mobile computing market.

"We've had a modest start because Surface is only available on our online retail sites and a few Microsoft stores in the United States," Ballmer was quoted as saying.

The new device, which runs a limited version of Windows and Office with a thin, click-on keyboard cover, is being positioned by Microsoft as the ideal combination of PC and tablet that is good for work as well as entertainment.

The launch of Windows 8 has already raised the hackles of European Union regulators, who warned Microsoft not to repeat the mistake of denying consumers a choice of rival Web browsers in its new operating system, in a dispute that has already cost the software giant more than US$1.3 billion in fines.