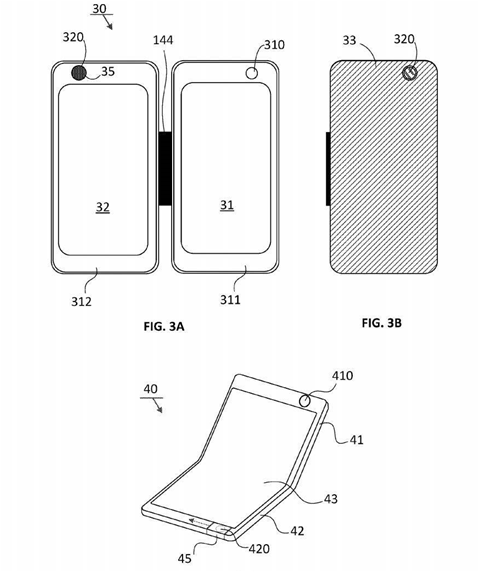 Microsoft is continuing to add smartphone designs to its intellectual property portfolio despite having exited the Windows Phone business two months ago.

Two new patent applications - for "two part device with camera and mechanical flap" [pdf] and "portable devices with adjustable optical arrangement" [pdf] - show a mobile apparatus with two separate screens that fold in the middle like a book.

They include designs with hinges and foldable screens.

While the patents don't lay claim to having invented foldable designs, they focus on a crucial feature of modern mobile devices - cameras: Microsoft is patenting ideas on how to make imaging units work when foldable devices are opened and shut.

The patents cover smartphones as well as tablets and laptop computers, phone-tablet hybrids, and gaming consoles.

For both patents, the six inventors are existing and former Nokia employees in Finland. Two of the inventors now work at Chinese electronics giant Huawei.

Foldable clamshell and slider style mobile phones were common in the early 2000s, until Apple's iPhone debuted with a flat touch screen and no numeric hardware buttons.

Smartphone vendors are working on bringing back foldable designs, however, for next year.

Already, Korea's Samsung this month released the W2018 flip phone, which features a 4.2-inch screen, for the Chinese market.

Korean media reported that Samsung has a Galaxy X smartphone in the works for next year with a three-panel foldable design.

Apple is also said to be working on a foldable iPhone, with Samsung competitor LG supplying bendable panels for the device.