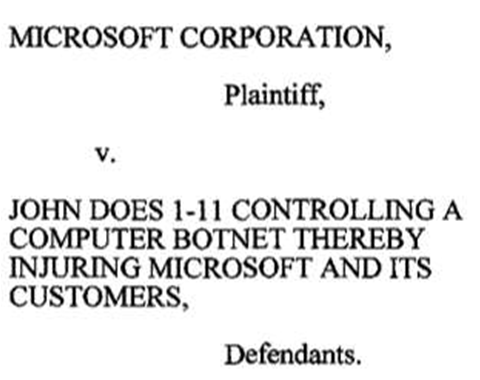 A million bots at a loose end, still infected.

Microsoft has revealed how it decapitated one of the world’s largest botnets, Rustock, capable of sending out billions of pharmaceutical spam a day.

The sudden end to Rustock spam late last week was the “denouement” of a multi-month joint effort codenamed "Operation b107" between Microsoft, drug company Pfizer and authorities in the US and the Netherlands.

The takedown was both technical and legal, with Microsoft employing the same strategy it used against the Waledac botnet operators by filing a "John Doe" law suit against the anonymous operators of Rustock.

Arguing its case for a court order to be issued, Microsoft told a Washington Seattle District Court that the unknown botnet operator had caused harm to Microsoft and other members of the public in Washington.

At its height in 2010, Rustock was responsible for 47.5 per cent of the world's spam, according to Symantec.

After obtaining the court order, US Marshalls officers last week seized Rustock’s command and control servers from five hosting centres in seven locations across the US.

Microsoft said in its court fiing that Rustock had a four tier structure, with the lowest used to send spam, a middle "control" tier consistnig of command and control servers, and a "command" tier which was obscured by the control layer.

“With help from upstream providers, we successfully severed the IP addresses that controlled the botnet, cutting off communication and disabling it.”

Rustock’s US servers were located in Kansas City, Scranton, Denver, Dallas, Chicago, Seattle and Columbus. In its legal filing Microsoft names each host, and lists around 2,500 domains and registries its operators had acquired.

Pfizer chipped in to Microsoft’s legal bid by writing a declaration warning that the drugs being offered via Rustock’s spam contained the wrong active ingredients and incorrect doses.

Microsoft's researchers believe there are up to one million Rustock-infected machines across the world and points to its support pages for how to remove the malware.