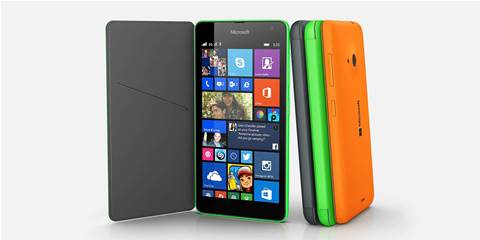 Microsoft has taken the covers of its first Lumia device that no longer bears the Nokia brand name, introducing a new mid-range device overnight.

The Lumia 535 has a five-inch Corning Gorilla Glass 3 screen with 960 by 540 resolution, which gives the display a density of 221 pixels per inch.

A Qualcomm Snapdragon 200 quad-core chipset drives the Lumia 535, with 1GB RAM and 8GB (expandable to 128GB with microSD cards).

The phone is 3G only, and can be had as a dual-SIM model as well. There is no LTE 4G variant of the Lumia 535.

A front-facing wide-angle camera with 24mm focal length and f/2.4 aperture sports five megapixel resolution. Microsoft sees the front camera as a key attraction of the Lumia 535 for customers who enjoy taking 'selfies' of themselves.

The rear-camera also has 5Mp resolution for still images. Neither camera can record higher than 848 by 480 pixel video resolution according to Microsoft's specifications.

While Microsoft has no fewer than 18 Lumia devices on offer at different price points, the smartphones have not been a commercial success.

Analyst firm Strategic Analytics said the worldwide market share for devices running Windows Phone declined in the second quarter of this year to 2.7 percent, compared to 3.8 percent a year ago.

Shipments of Windows Phone devices also fell to from 8.9 million to 8 million in the second quarter of 2014, Strategic Analytics said.

Google's Android mobile operating system remains the top dog in the smartphone market, and grew its market share to 84.6 percent on the back of a large increase in devices shipped, up from 187 million units to 250 million, the analyst firm noted.