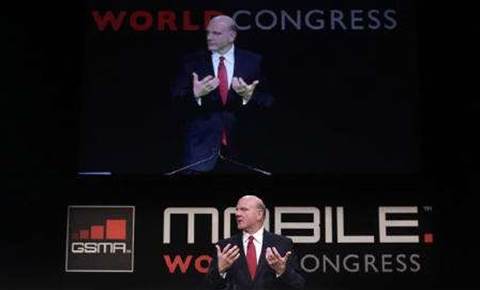 The new strategic partnership has been received with scepticism in the market, but Ballmer said the scale that Nokia would bring to an already improved Microsoft mobile platform would be good news for operators, developers and consumers.

"We're off to a strong start. We know we have a lot of work to do," he said in a keynote address at the Mobile World Congress fair in Barcelona. "We have a lot of energy, optimism and a sense of tremendous opportunity."

"We're sure ... Nokia's going to deliver absolutely phenomenal Windows phones," he said, without elaborating when the first results of the collaboration would hit the market.

Ballmer invited Nokia CEO Stephen Elop to join him on stage. "Microsoft and Nokia together represents a natural partnership. People are getting it," he said.

The company said it is targeting for a "significant volume of Nokia Windows phones" to hit the market in 2012 but did not give more specific details.

Nokia shares closed down 5.3 percent, while Microsoft traded down 0.5 percent at US$27.10 on Nasdaq at mid-afternoon.

Microsoft has struggled to gain significant market share in the wireless market, against rivals such as Apple Inc's iPhone and Google Inc's Android mobile software. Its Windows Phone 7 software has been well received, but it does not have as high a profile as either of its big rivals.

Ballmer said a free update coming soon would include more powerful Web graphics that draw on the phone's hardware as well as software, integration with Twitter and a better ability to run several tasks at the same time.

He called it a significant release and said it would be coming "later this year," without saying exactly when.

Microsoft also told analysts at the mobile trade show that the company expects a lot more Windows Phone 7 devices to go on sale this year, including lower priced ones, as it expands to new markets.

"We'll have lower priced phones on the market this year," Microsoft Mobile President Andy Lees said during a webcast of an analyst event at the show. "We'll be in a lot more languages and a lot more countries," he said.

The company said it expects the Nokia agreement to accelerate its growth.

(Reporting by Georgina Prodhan in Barcelona and Sinead Carew in New York; Editing by David Hulmes)