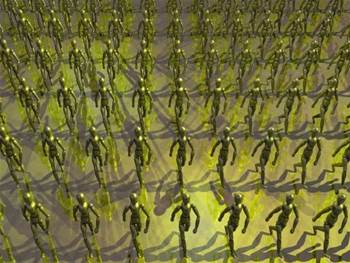 Researchers have developed a prototype of a microscopic device that can construct nano machines.

The development is a step towards nanotechnology’s long-term aim of creating nanoassemblers, which are tiny devices that can in turn create yet smaller devices on a scale of just a few billionths of a metre.

Using four precisely positioned Microelectromechanical Systems (MEMS) devices, researchers at the US government's National Institute of Standards and Technology (NIST) have assembled a complex structure on a very small scale.

"Very few effective tools exist for manipulation and assembly at the nano-scale, thereby limiting the growth of this critical field," said Jason Gorman of the NIST Intelligent Systems Division.

"If successful, this project will result in an on-chip nanomanufacturing system that would be the first of its kind," he said.

Nanoassemblers were introduced by nanotechnology pioneer K Eric Drexler in his 1986 book, The Engines of Creation.

Since, there have been two approaches to developing the technology: a top-down approach that manipulates single atoms, and a bottom-up approach that uses chemistry to build molecular machinery.

The NIST system is designed for real-time imaging of nanomanipulation procedures with the use of a scanning electron microscope and multiple nanomanipulators.

Nanomanipulators are each composed of a positioning mechanism with an attached nanoprobe that can be used to grasp and assemble nanostructures.

Gorman’s design is expected to yield nanoassembly systems that cost around $400 per chip at present costs. This is thousands of times cheaper than competing technologies such as macro-scale systems.

In future, multiple nanoassemblers may work simultaneously to manufacture next generation nanoelectronics.

Researchers expect the technology to be able to construct almost any material from atoms and molecules, including super-strong construction materials and nanobots that can make other nanobots to solve global problems, such as food, water, and energy shortages.
Got a news tip for our journalists? Share it with us anonymously here.