Melbourne Uni turns to IoT to understand campus use 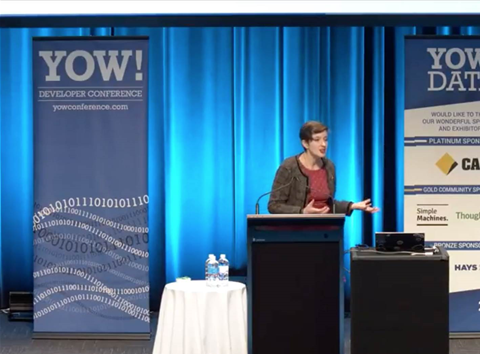 The University of Melbourne is continuing to experiment with internet of things projects to understand campus utilisation and to use its campus as a testbed for a wide range of research.

Data strategy advisor Fiona Tweedie told the recent Yow! Data 2018 conference that data management and governance are key to the university realising its ambitions of operating a “smart campus”.

The university has raised the ambition before, but mostly centred on using data collected by its wireless network to manage the use of space.

Space utilisation continues to be a theme of the university’s efforts, but there are open questions on how much to read into wi-fi data for that purpose.

“One of the questions we keep asking is ‘should you really be doing that’?” Tweedie said.

“Wi-fi data is potentially a really powerful source of information for addressing questions of space usage.

“It’s possible to identify individuals logged into the network at any one time, which gives us good information about room usage and bookings so our groups are allocated to appropriately sized rooms.

“This opens up a whole ethical minefield. We’ve got work going on addressing some of these questions at the moment.”

Tweedie noted any proposal that involved tracking the location of individual students remained “off the table”.

However, the university’s facilities management team is able to tap into other existing data sources, and is also exploring some sensor deployments of its own.

One data option is the central room booking system - “which is fine as long as the room is booked through the central system and we can access that data”, Tweedie noted.

However, it does not cover all spaces across the campuses.

“Some meeting spaces are administered internally by departments so that data’s not accessible,” she said.

“We’re also assuming that people actually book the room and don’t just go and park themselves in there.”

The university is looking at how it might be able to augment these existing sources of data - booking systems and network - with sensor data.

“Imagine we have sensors on the doors which tell us how often they open and close. This will give us an idea about traffic as well as occupation of the room,” Tweedie said.

“Another source of data which I know that facilities management are interested in exploring is thermal imaging.

“So again, rather than relying on wi-fi data and assuming that everybody is carrying their pocket homing device at all times, being able to get a sense of how occupied the room is using thermal imaging.”

The most powerful measure of space utilisation is likely to come from the combination of all of these data sources.

“You can then start to get a really detailed picture of the foot traffic and also the levels of occupation of a room,” she said.

It’s also possible that student-led projects could add an extra dimension to the space utilisation challenge.

Tweedie noted the existence of several projects, including one where a student has designed and incorporated 3D-printed sensors into cushions “so you will know when someone is occupying a seat because the sensor is being triggered”.

A growing array of researchers are also using existing data sources - or generating their own data - to address questions in diverse fields such as engineering, architecture, urban planning, forestry and ecology.

“Things like, how can urban planners mitigate the effects of extreme climate events? How do we design the campus to be a friendly and enjoyable place to be? How do we keep trees alive in paved areas? We’ve got all this research currently going on,” Tweedie said.

University Square - at the university’s main Parkville campus - was, until May this year, home to eight Bureau of Meteorology-grade weather stations.

“They provided data which also went to the City of Melbourne because they were interested in the climatic conditions in the city,” Tweedie said.

“This information was used to study things like water efficient design, and the impacts of urban greening.

“Adding lots of plants to a landscape can help control temperature, humidity and water retention, because one of the things that urban planners want to do is try to keep water in the landscape rather than dumping it all immediately into stormwater drains where it just floods the streams and river system.”

Outside of science, the same data was also of interest to psychology researchers.

“Urban greening projects - as well as those that improve the physical quality of the environment and the air quality - is also intended to improve the human experience,” Tweedie said.

“The theory is it’s just a nicer place to be.

“So the data these weather stations collected is of interest to researchers in disciplines across the campus.”

Again, there were also some student-led projects that also collected their own data across the campus, including one project monitoring “microclimates” around the campus using dozens of iButtons, tiny data collection devices made by Maxim.

Building its own Data.gov.au?

Tweedie’s interest in understanding the types of data collection projects underway at the university, and the institution’s treatment of data, is seen as “critical to understanding what we can do with it”.

She suggested there was room for extra rigour and the adoption of standards around data governance and use.

“I’m interested in how we can use things like policies and standards and build in decision points so that when we get to the end of the project, and we have this wonderful agile delivered data product, we also know who owns it, where the data has come from and where it’s going at its end of life,” she said.

“Something I’m working on personally is an expanded version of the Open Data Institute data ethics canvas.

“I want to see a tool like this built into project plans so that people are encouraged at the beginning of a project and as it continues to have check points where they review the possible impacts of [data collection]”.

Tweedie said she wanted to see the university stand up its own, centralised data platform.

“Anyone who’s worked in a large organisation will know data collections proliferate. I feel that data platforms could do the same thing if we don’t keep a close eye on them,” she said.

“My ambition is to see an open data platform for the university, something like data.gov.au, where data is collected from all the projects that happen around the university [and] it can be shared and reused.

“Even if the data can’t be shared, at least we can signal that it exists so it can be requested.”