Melbourne IT to pool storage across data centres 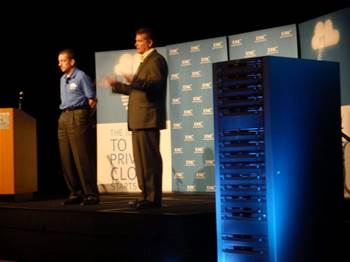 Melbourne IT has revealed its intention to create a shared storage environment across its data centres, potentially using EMC's VPlex virtual storage technology.

The web hosting firm was Australia's only beta tester for VPlex, which - in its first iterations - enabled customers to pool storage resources either within a single data centre or between two data centres up to 100 km apart.

The technology worked with both EMC and non-EMC storage arrays, the vendor said.

Chief technology officer for Melbourne IT Glenn Gore said "one of the greatest interests for Melbourne IT from the VPlex beta is actually not so much what VPlex can do, but what we can do with VPlex".

"We're really interested in creating virtual farms and clusters that sit across multiple data centres with VPlex underlying that, and providing a truly shared storage infrastructure across the data centres," Gore said in a video screened at a VPlex preview.

"Our vision is really to go away from having discrete physical data centres and creating a concept of having a truly virtualised data centre."

EMC's president of information infrastructure products Pat Gelsinger believed that VPlex, when combined with VMware's VMotion on the server side, would enable customers to create "truly dynamic data centre" environments.

"Today I can VMotion across distance but what do you do when you want to move terabytes of storage? We're largely limited by the flexibility of storage systems today."

Gelsinger said VPlex used with VMotion made storage and compute capacity more fluid within and across data centre environments.

"We think it's a very powerful new tool that's about to change the way we think about the way we build and design data centres," he said.

Two versions of VPlex were launched today - local (limited to pooling storage in one data centre) and metro (pooling between two "synchronous" centres up to 100 km apart - but the distance "could be longer than that depending on the network characteristics of the WAN provider" connecting the centres, Gelsinger said).

The metro version would enable customers to "create truly active-active data centres", according to Brian Gallagher, president of EMC's storage virtualisation product group. Active-active data centre configurations typically enable primary and secondary centres to run production workloads, depending on which has the capacity to handle a specific processing request.

Two more versions of VPlex were planned in the future - Geo and Global - which will extend VPlex to run across continents, subject to bandwidth constraints.

These would, among other things, enable customers to "teleport apps not just across synchronous data centres but across the globe, move thousands of machines across thousands of miles", perform batch processing where the results were "immediately available across the production environment" or aggregate multiple data centres into a single larger virtual facility.

Geo and Global would be available around the "beginning of 2011", EMC said.

The basic product - VPlex Local - has up to four VPlex engines (each consisting two directors running multi-core Xeon processors and with 32 GB cache pool) and supports "up to 8,000 virtualised storage volumes", according to EMC.

The VPlex Metro product featured two clusters "with up to four VPlex engines each and support for up to 16,000 virtualised data volumes," the company said. No pricing information was released.

Gallagher said that, although EMC's "first approach to market was an appliance, over time you will see us expand that and apply [VPlex] differently."

EMC was coy on the subject of revenue expectations from the new product line.

"It's a new category product," Gelsinger said. "We expect revenue to ramp in 2011 but our revenue projection for [VPlex for] this year is quite modest."

VPlex was touted by EMC as a foundation technology to assist customers in transitioning their IT systems to operate in a private cloud.

EMC chief Joe Tucci told a packed EMC World 2010 conference in Boston that a new approach to IT was needed because infrastructures had become too complex and because the world was "on the cusp of another information explosion".

"I've been in this industry since 1970, just about 40 years. I've seen information technology emerge in waves. These waves transform and build on the previous wave and they're disruptive.

"Let's just call the next wave cloud computing - the transformation of IT into a service. This [will be] the biggest wave in the history of information technology... but the journey will have phases. You're not going to say, 'I'm going to a private cloud tomorrow'.

"We want to be your partner. It's a journey and we'll be there with every step with our products, partners and services."

Over 5,700 EMC customers and partners were expected to attend the four-day conference.