NSW Govt data centres on track to be Australia's greenest 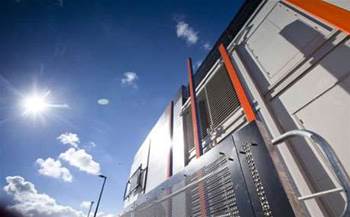 Outside the Silverwater data centre.

Metronode and the NSW Government expect that this time next year they will have produced the greenest data centres in the country, and the first to reach a five-star NABERS rating.

At the opening of the second module of the Metronode facility in Silverwater on Friday, CEO of Green Global Solutions Bob Sharon announced he had fitted the necessary equipment to commence a NABERS for data centres assessment process.

Sharon commended the GovDC team for "showing leadership" and "pushing the envelope in terms of design" by fitting out the facility with innovative and energy efficient designs like evaporation-based cooling.

Only one data centre in Australia has so far completed a NABERS accreditation. Two halls of Fujitsu’s Noble Park data centre were assessed as four star in October last year, and four other data centre operators have also pledged to undertake the audit and publish their results.

Metronode started work on the two brand new facilities (the other is in Unanderra) in 2010 after signing a deal with the state that would see it become the anchor tenant and consolidate all agency demand into the two centres by 2017.

Achieving the five star rating is one of the conditions of the arrangement, and Metronode general manager Malcolm Roe said he was very confident it would be achieved.

NSW Finance and Services Minister Dominic Perrottet said migrating into the GovDC facilities was expected to halve electricity usage for most agences, saving $5 million each year and generating an emissions cut equivalent to taking 7500 cars off the road each day.

While he acknowledged the facility wasn't much to look at from the outside, he said it represents a concept central to his parliamentary mission.

"Cloud computing and centralised data storage are core to one thing that as Finance minister I am very interested in - saving money," he said.

He described facilities like the Silverwater data centre as the "mines and mills and factories of the 21st century".

"They will become even more important as we move away from hard industries into the digital space."

Bob Sharon, CEO of Green Global Solutions, will be among the speakers at the 2015 'Australian Data Centre Strategy Summit'.