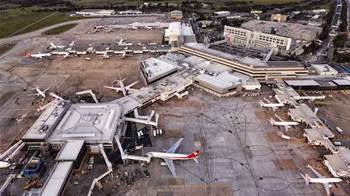 Australia's second busiest airport, Melbourne Airport, serves around 31 million passengers annually, a figure that is forecast to more than double over the next 15 years.

The airport's executives had the foresight to invest heavily in a carrier-grade, virtualised infrastructure several years ago. Designed to provide modular data centre capacity, the environment has grown along with the airport's master plan.

The most recent development in that plan, the new T4 terminal, was built around self-service technology intended to eventually handle an expected 10 million passengers passing through the terminal annually.

Planning for this kind of demand surge is never easy, but Melbourne Airport CIO Paul Bunker says the decision of the T4’s architects to involve IT at the earliest stages of planning reflected the recognition that IT is now a key enabler of the business.

“It's easy to talk about a vision but there are a whole lot of practicalities that could actually compromise that,” Bunker said.

“You have to prepare yourself to expect that you're not going to get the full outcome that you're looking for. But I was brought into the discussion in my second week on the job, and that engagement very early in the piece – and being engaged along the way – made all the difference.”

The T4 terminal – which supports budget airlines Tigerair, Jetstar and REX – opened in August 2015. Innovations such as the first fully-automated, self-service bag drop in the southern hemisphere and more open security clearance procedures simplified the check-in processes for passengers transiting the new terminal.

The modular Vblock environment currently runs 356 SQL databases across 17 production SQL Server instances and 2.5 petabytes of online storage – the majority of which is dedicated to recording CCTV footage from the 1700 CCTV cameras installed throughout the airport.

Completion of the T4 project – which also includes pervasive wi-fi courtesy of the airport's 323 wireless access points – was made possible thanks to earlier investment in extensive backbone technologies such as the carrier-grade MPLS network that was implemented during the airport's $330 million international terminal upgrade a decade ago.

Although it represented a significant investment at the time, that bandwidth has proven crucial to supporting T4 and the increasingly data-heavy systems on which the airport's tenants rely every day, according to Bunker.

“You always have to make the call about the level at which you operate,” he said. “Do you go for something that is affordable but higher risk, or do you try to convince people to invest in tier-one applications and infrastructure?

“It comes down to the whole risk profile around that – and we've invested in the data centres to ensure that every day the experience runs without interruption.”

There are other practical reasons for the investment: as a 24x7 airport, the IT team has “a small window of time” to upgrade and maintain systems. Instead of trying to work around this in the event of a failure, Bunker said his focus has remained around automating wherever possible and simplifying whatever technology he can.

“Simplification is really important,” he said. “I don't want to have to employ another 15 people because we put in some fancy thing.

“I want to employ people who can do different things in a much more effective way. We move them up the technology stack in the best way we can so they're operating at a level that truly adds value – not in a way that they could probably teach me to do.”

The completion of T4 expansion comes at a key time for Australia's airports, which are facing expected surges in passenger numbers and increasingly looking to data-enabled logistics solutions to support the growth.

Sydney Airport, for example, has also been investing heavily in IT to migrate from a range of disparate legacy infrastructure systems to completely virtualise its compute and storage capabilities in a private-cloud environment.

Given the long timeframes that airports need to plan for, Sydney's infrastructure upgrade will likely overlap with the move towards that city's second airport at Badgerys Creek.

But with no second airport in sight, Melbourne Airport will need to continue scaling its data centre environments both upwards and outwards to keep supporting operational and passenger-facing systems.

“We need to recognise that we work in an industry that deals with this kind of expansion and growth really well,” Bunker said.

He recalled when he was recently asked to give a 20-year forecast about his technology plans. This is too long-term to predict with any accuracy, he said, but the infrastructure going into place now is being designed to support whatever direction the IT goes.

“Technologies can grow, expand and accommodate much more than five, 10, or 15 years ago,” he said.

“And while we can talk about the really big changing things – biometrics and so on – at the moment some of it is a bit pie-in-the-sky.

“So the question is, how do I convince people of pie-in-the-sky? That's the real challenge.”