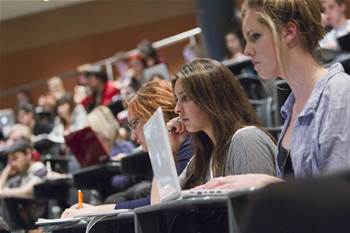 New models for applications, data and IT staff.

Macquarie University will consolidate staff from 30 technology teams across its Sydney campus into a centralised informatics group in a bid to “unite campus IT into an effective whole”.

It will see staff currently distributed among faculties consolidated into the centralised team, which itself already has 140 staff.

The move follows an review of the operational model last year, which recommended the centralisation of “all non-student-facing technology functions”.

Chief information officer Marc Bailey declined to disclose how many staff currently made up the distributed teams and the target operating model it was striving for.

By consolidating teams, he said the university hoped to get a better handle on its annual IT budget of $40 million, of which $10 million was managed by the 30 distributed teams.

It remains to be seen how the centralisation strategy will affect faculty-based licensing and operating platforms.

Bailey said the university did not have a standard operating environment (SOE) for the 14,500 networked machines and 16,000 devices that connected to its wireless network each day.

Instead, software licensing, maintenance and decisions are handled on a faculty level, so that users from various disciplines – such as economics, arts or science – had systems that best suited their requirements.

Bailey described Macquarie University’s IT strategy as one that aimed to “sell, not tell”, by producing compelling “products” that users chose to use without being forced.

The informatics group planned to develop an “opt-in, standard package” of software in future, but mandatory, campus-wide SOEs were “neither feasible nor desirable”, Bailey said.

“We’re not about trying to manage [users’] computers,” he said, citing the university’s goal of delivering the “number one digital campus experience”.

“People need technology that they want to use ... Any [centralised] control over operating systems is neither feasible nor desirable.”

Alongside the centralisation work, the university has a capital expenditure portfolio of 40 IT projects planned for the year.

Bailey described 2012 as the “Year of Applications” for the informatics group, following a “Year of Data” last year and “Year of Plumbing” in 2010.

Staff will also work to geocode and digitise the Macquarie University campus in 2D and 3D to improve its Google Maps listing and generate data that may be used by mobile applications.

Other projects could deliver a more seamless experience for students using iLearn and the eStudent student administration portal supplied by TechnologyOne, Bailey said.

“Our timetabling system needs to talk more to our student management and financial systems,” he added.