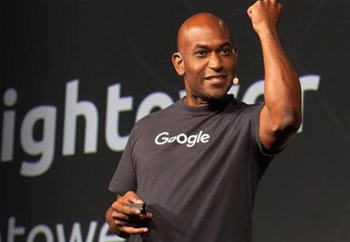 Hightower’s last visit in July 2019 was to Melbourne only, where he fronted several oversubscribed events and also held private sessions with NAB and ANZ Banking Group.

His closed-door sessions with ANZ drew particular attention as the bank solicited direct feedback on its implementation of Google cloud and Kubernetes, and associated engineering practices.

Hightower’s return to Australian shores had him in Sydney for the first time where he had several meetup appearances planned.

One of the venues was originally listed as Macquarie Bank, raising the possibility that - like ANZ last time - Macquarie would take advantage of Hightower’s presence and run a staff-only session.

That was confirmed to have happened on Tuesday evening, with Hightower pictured with some of the bank’s Kubernetes team on a rooftop backed by the Macquarie logo.

iTnews understands Hightower met with the bank’s container platform and digital data platform teams to discuss Macquarie use of Kubernetes and Anthos.

Macquarie’s Kubernetes implementation is about four years old, with both Anthos and OpenShift used to manage the environment.

The discussion is also believed to have touched on the bank’s container strategy and on reliability and security aspects of the implementation.

The security aspects of the discussion mesh with an earlier appearance by Hightower at the Golang Meetup in Sydney, where he discussed at length the security risks of open source dependencies in software projects.

That session, held at the Microsoft Reactor space in Sydney, was recorded.

It appears that may be the best chance to catch Hightower, as a pair of Google Developer Group (GDG) cloud meetups in Sydney and Melbourne that were scheduled to host him this week have both cancelled over COVID-19 fears.

“We have a duty of care and responsibility to our community and we have come to the conclusion that bringing 200 people together in close proximity to each other would be irresponsible of us,” the Sydney GDG cloud group said.

The Melbourne-based meetup, scheduled for Thursday, was cancelled with a similarly-worded statement.

The Sydney GDG event had proven particularly popular with registrations topping almost 350, prompting it to be shifted from its original location at Macquarie Bank to Google’s own offices.

Hightower is also known to have held a private session with techs from REA as well as with Australia Post in Melbourne on Wednesday.