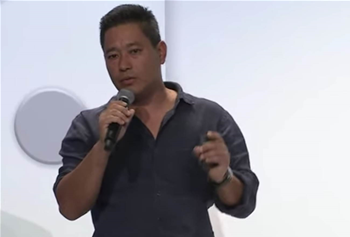 Rajay Rai at Google Cloud Next '19.

To outsource management overhead on its K8s environment.

Macquarie Bank is looking to Google’s newly-branded Anthos service as a way to outsource some aspects of managing its three-year-old Kubernetes environment.

A large part of its ability to move faster has come from standing up a platform-as-a-service (PaaS) using RedHat OpenShift - which is essentially a distribution of Kubernetes packaged with other useful tools - running on cloud-based infrastructure.

As reported by iTnews last year, the PaaS and an accompanying shift to DevOps was aimed at getting code - new products, features and fixes - into production “in minutes” instead of via big fortnightly updates.

The speed goals have now largely been accomplished.

“We went from having the ability to sequentially release, which is maybe once in a month or once in three months, to something like 60 to 100 releases a day, and we do this actively in production,” Rai told the Google event.

But, Rai noted, other challenges have since emerged that either distract developers from their core focus - building value - or that threaten the retail bank’s speed gains.

“We want to move the line of innovation closer and closer to the developers so they only have one job and one job alone, and that is to create world-class experiences for our customers,” Rai said.

Rai suggested too much effort was still being expended on managing Kubernetes.

Macquarie Bank bought into OpenShift - and therefore Kubernetes - at a time when there were few managed or packaged Kubernetes options about, and when Kubernetes itself was not the container orchestration force it is today.

Since that time, many managed Kubernetes options have emerged, including by Google itself (where Kubernetes originated).

Other early adopters of Kubernetes, such as Atlassian, are also more or less in the same boat, finding much of what they did internally to stand up Kubernetes can now be handled by a managed product.

“We have spent a lot of effort in the past three years managing Kubernetes - it's not an easy task, it's not for the fainthearted,” he said.

“We've also been curating [complementary tools] from upstream and bringing it in - we're actually working with partners upstream [to do that] and it's a challenge for us.

“What we want to do is outsource all this responsibility to Google.

“We want to make sure that we are focusing wholly and solely on one thing alone, which is building business value for our customers and our partners.”

Rai indicated that Macquarie Bank is an early user of Google Anthos, a rebrand of what was previously known as the Cloud Services Platform (CSP).

“We are excited to be working with Google [on] Anthos,” Rai said.

Rai indicated he was particularly interested in other tools that Google bundled or integrated with Anthos, which would remove the need for Macquarie Bank to go through the process of doing that for tools it wanted to use.

“We are hoping that you continue to curate technology from upstream, bring it to us, make it enterprise grade and enterprise ready and we can focus on what we do best which is building the business value for our customers,” Rai said.

One interesting aspect of Macquarie Bank adopting Anthos is that Anthos operates in a very space to OpenShift.

Red Hat describes OpenShift as a package of Kubernetes and “additional tooling as features that we find important and our users demand.” Some commentators have suggested thinking of Anthos “as something like Google’s version of OpenShift.”

iTnews sought clarification from Macquarie Bank on to what extent, if any, Anthos adoption would impact the future use of OpenShift.

Despite the overlap in capabilities, Rai said in a statement to iTnews this week that both OpenShift and GKE [Google Kubernetes Engine] would be used on an ongoing basis.

“We choose the right technology for what we’re trying to deliver and solve, and we see roles for both GKE and OpenShift in the way our teams are working to deliver great digital banking experiences for our customers,” he said.

“Our approach is informed by us evaluating each use case on the relevant cloud platform and then making the decisions as we go, and we’re using both GKE and OpenShift to do this.

“This means we choose various environments to leverage the best of breed technologies for our customers and support their needs for speed, reliability and security.”