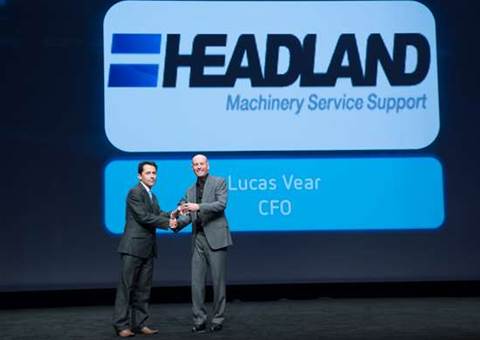 Who says there is no innovation in Australian manufacturing?

Occasionally a company will pursue large internal IT projects to fulfil a need that can't be met in the market - only to find themselves spawning entirely new businesses.

Melbourne-based engineering and manufacturing equipment specialist Headland Machinery joined this small club when it opted to streamline its core enterprise systems and move them into the cloud.

The company had been bearing the cost and pain of maintaining four separate enterprise systems to manage its field staff and customer relationship functions.

It wanted to integrate them onto a single cloud based system that would also encompass its New Zealand operation, Aotea Machinery.

In July 2011 the company handed the project to Lucas Vear who was, at the time, one of its senior executives.

Vear had previously been made acquainted with the concept of cloud computing, and by the time the project came over his desk, he was a full convert to its church. The company decided to adopt Netsuite’s cloud platform after considering a broad range of technology options.

“The main requirement was to actually have one system for the entire business that gave us one view of our customers and to know what was going on at all times, in real-time and to be able to manage the business accordingly," he told iTnews.

But Netsuite didn’t offer a field service management module, and after 18 months it became clear the company could only successfully manage to streamline its systems from four to two.

“The directors asked if we could build it within Netsuite, and gave me the project,” Vear said.

The New Zealand operation had yet to move to the new system but had already laid some groundwork in devising what the company would need to develop internally. Vear took the project to a software consultancy and hired some coders to get about building it.

The company purchased and customised a drag and drop schedule board from a third party software provider (AVT) for use within Headland and Aotea.

Given the short six month timeframe for delivering the system, this was considered the only way of delivering the features required for Headland within the project time frame.

The result was NextService – a complete asset-based field service system operating on the Netsuite platform.

No longer having to maintain four systems meant the company was able to save around $300,000 in annual salaries. The cost savings would have surpassed 100 percent had the company not had to pay to develop the system, Vears said, and it delivered a return on investment of 98 percent in its first year.

Headland realised it had a potentially lucrative piece of intellectual property on its hands. The company set about obtaining Netsuite software development accreditations in order to take NextService to market.

Recognising the potential to sell the product to rivals, the company established a third and entirely separate business entity to sell NextService – a software start-up called Klugo.

Klugo’s software is yet to be used outside of Headland, but it has established distribution and marketing arrangements with Netsuite, and Vears is confident it will succeed.

“We have a strong prospect list and we hope secure orders very soon but we’ve literally started from scratch,” he said.

Klugo shares premises with Headland but the businesses may soon be physically separated to provide customers with extra assurance of its neutrality.

“We’re a start-up and we need to get a few more runs on the board. Once we do that we’ll look at it,” Vears said.