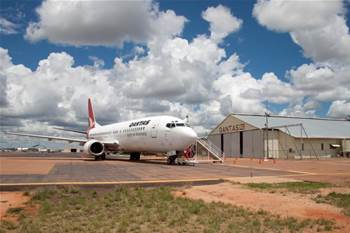 Birthplace of Oz aviation says no to flying insects.

There’s a lot that can go wrong at an airport data centre in the middle of Queensland, from raging hot summers to winter lows that plunge below freezing, through to “incursions” from the local wildlife.

For Longreach Airport, birthplace to Australian aviation stalwart Qantas, these extreme conditions resulted in almost daily reboots for a data centre that was only built in 2012.

And despite being a smaller airport, chief operating officer Kevin Gill said all of the security and operational matters need to be on par with their larger counterparts.

“The airport team is small in size, but procedures around check-in, security, departure, baggage, and everything else, are the same as in larger airports,” Gill said.

“It is vital technology doesn’t get in the way and instead enables staff and makes them more effective and mobile.”

Locusts and grasshoppers proved particularly problematic in a region prone to insect plagues, resulting in scheduled bug sweeps to avoid a buildup of desiccated insect husks compounding the issues caused by the heat.

Rather than switching to the cloud or other off-premises data centre, Gill instead opted to enclose the airport’s servers in a sealed, climate controlled ‘SmartCabinet’ developed by Vertiv.

“The enclosed mobile data centre is fitted with remote central monitoring which runs the airport’s essential services, including CCTV, access control and connections to corporate systems, which need to be on premises due to the heavy data bandwidth requirement of Cloud services,” Gill told iTnews.

“From a staffing point of view, the new system is far preferable as it reduces frustration and increases efficiency and productivity.”

Since the installation of the SmartCabinet in August last year, Longreach Aiport hasn’t had a single incident of heat or insect related stress in its IT systems, despite recording 11 days over 40 degrees in December and every day this month reaching at least 39 degrees.

“Our systems are now operating well, even during the summer’s most extreme temperatures,” he said

Now that staff no longer have to stress about early morning reboots or literal bug sweeps, the airport has been able to focus on more value-add IT projects.

One such project is part of a larger initiative from Queensland Airports Limited, which involves the integration of an internet of things network across the airports.

Gill said water meters, CCTV devices and electrical meters have all had the IoT treatment to drive operational efficiencies and reduce the need to manually check each meter.

“Live data is available at all times and at all locations as a Cloud service, ensuring information is correct and instantly available. This is crucial to an operation such as ours where we operate critical infrastructure in remote locations and need to ensure a seamless journey for our customers.”

The IoT data has also sparked the interest of Southern Cross, Griffith and James Cook Universities. Southern Cross also collaborated with Queensland Airports' video analytics project which has been listed as a finalist in the 2018/19 iTnews Benchmark Awards.

IBM has also been brought on board along with other industry partners on a project-by-project basis.