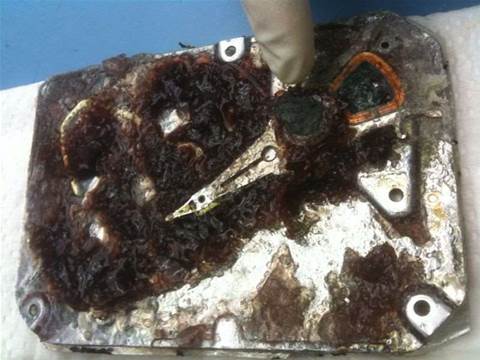 The list was compiled from a global poll of Ontrack Data Recovery engineers, who said they attended to "more than 50,000 data recoveries" in the past year alone.

"While some are extreme, it is important to note that advances in technology and expertise make no situation impossible," the firm's Asia Pacific general manager Adrian Briscoe said.

The top ten recoveries (all of which were successful, according to Kroll) were:

10. A customer reformatted an SD card by accident, erasing one particularly important photo. The photo in question was from a recent trip, where the customer helped capture a breath-taking scenic photo for a stranger, who forgot to bring a camera. The customer had promised to e-mail the photo when the customer returned home.

9. The family house cat decided to replace a game of cat and mouse by playing with the AC power cord. It ended poorly, according to Kroll. The cord was attached to an external USB HDD, which fell.

8. Somehow a laptop was dropped from the second floor of a business operation. Sent initially to another data recovery company, the data was deemed unrecoverable. A second opinion yielded different, more promising results, according to Kroll.

7. A businessman running late for a meeting apparently made the mistake of placing his laptop on the roof of his car before driving off in rush. As he turned a corner, the laptop flew through the air, crashing into a wall. Ontrack Data Recovery engineers repaired the broken drive and recover the data.

6. A server fell off a rack in a server room after an apparent brawl between two staffers. Lucky for them, the information was recovered. The firm didn't say whether either had kept their jobs.

5. While riding on his motorbike, a photographer's bike basket containing his camera came loose. The camera flew out and broke, leaving the memory card drowning in a puddle.

3. A horse riding tour ended abruptly with a fall. The rider was wearing a camera at the time of the accident, and while the rider got a clean bill of health, the memory card did not. The files were corrupted and could not be uploaded to the owner's computer. It was apparently only third time lucky with the recovery effort.

2. A hard drive plummeted 200 feet to the ocean's floor. It was discovered six months later and was sent to Kroll Ontrack's cleanroom, where 99 percent of the data was imaged and recovered (pictured).

1. As legal officials entered the home of a criminal suspect, the individual in question threw a laptop containing potentially pertinent evidence out the window of a 12-story building. It smashed into many pieces on the sidewalk. Investigators turned to Kroll Ontrack to recover the photos, videos and e-mails.