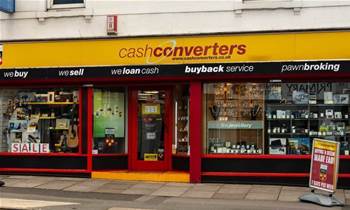 When it comes to legacy software, for some chief executives it’s not so much a question of ‘does it spark joy’ but how quick can you burn it off?

Just ask Cash Converters’ CEO Brendan White, who started the week with the tech equivalent of a curbside chuck out amid a costly de-cluttering and shock profit warning that the lender will now limp to an annual statutory net loss of between $2 million and $4 million.

Junked IT projects and large software write-downs topped reasons cited by the high street pawnbroker for the hole in its pocket.

In a nasty surprise for investors on Monday morning, the national hock shop took the chainsaw to previous earnings guidance that had stood at between $18 million to $20 million on a pre-tax profit basis, well off the $22.5 million full year profit it booked in 2017-18.

In its statement to the ASX, the rapacious reseller of hocked laptops, smartphones, video games and guitar amps said “accelerated amortisation and depreciation” had dug a $3.5 million adjustment cash pit.

“Given the rapidly changing technology environment, the company has completed a review a comprehensive review of capitalised software and other assets on the balance sheet,” Cashies said, adding that write-downs had been accelerated where “the useful life has been determined to be no-longer appropriate”.

“This change will see all current software assets with a useful life of no longer than 5 years.”

Under the next line item of “UK IT project” Cash Converters consigned another $1.6 million as dead and buried.

“The company has written-off an investment in a third-party loan management software platform being developed for the UK business. An alternative solution was determined to be more appropriate,” Cash converters said.

While Cash Converters has always been at the lower-mid to lower credit quality end of the market, the ability of newer pure digital payday lenders like Nimble and Wallet Wizard to attract customers at lower costs means the credit pool is getting more crowded.

Cash Converters’ latest chief executive Brendan White, who was appointed in March 2019, said that after having a chance to review the business, technology would be a focus.

“By further leveraging our technology platform, digital channels, and extensive store network we will continue to build upon the momentum of revenue growth operational efficiencies in 2019, thereby delivering value for shareholders in the year ahead.”

White said an update “on our emerging business strategy” would be forthcoming at audited full-year results “towards the end of August”.