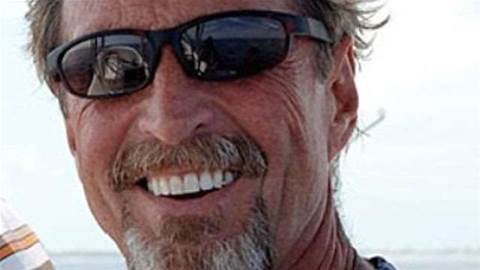 US anti-virus software guru John McAfee, who is on the run from police in Belize seeking to question him in a murder probe, has crossed into Guatemala and said on Tuesday he will seek political asylum there.

McAfee has been in hiding for three weeks since police in Belize said they wanted to question him as "a person of interest" about the murder of fellow American Gregory Faull, with whom McAfee had quarrelled.

McAfee smuggled himself and his girlfriend, Samantha, across the porous land border that Belize shares with Guatemala. He stayed at a hotel in a national park before heading for Guatemala City on Monday evening.

"I have no plans much for the future now. The reason I chose Guatemala is two-fold," McAfee told Reuters by telephone from Guatemala's Supreme Court, flanked by his lawyer, former attorney general and lawyer Telesforo Guerra.

"It is a country bordering Belize, it is a country that understands the corruption within Belize and most importantly, the former attorney general of the country is Samantha's uncle and I knew that he would assist us with legal proceedings."

McAfee has denied involvement in the murder and told Reuters on Monday he would not turn himself in. He posted repeatedly on his blog www.whoismcafee.com while on the run, describing how he would constantly change his disguise to elude capture.

On Tuesday, he appeared with his hair and goatee died black, and wearing a dark suit and tie - a far cry from the surfer-style blonde hair highlights, shorts and tribal-tattooed bare shoulders he sported in Belize.

"[Guerra] is now attempting to get political asylum for myself and for Sam. I don't think there will be much of a problem. From here I can speak freely and safely," McAfee said.

McAfee says he believes authorities in Belize would kill him if he turned himself in for questioning. Belize's prime minister has denied the claim and called the 67-year-old paranoid and "bonkers".

On the Caribbean island of Ambergris Caye, where McAfee has lived for about four years, residents say he is eccentric, impulsive, erratic and at times unstable, with a penchant for guns and young women.

He would often be seen with armed bodyguards, pistols tucked into his belt, and McAfee's neighbor had complained about the loud barking of dogs that guarded his exclusive beachside compound.

His run-in with authorities in Belize is a world away from a successful life in the United States, where he started McAfee Associates in 1989 and made millions of dollars developing the Internet anti-virus software that carries his name.

There was already a case against McAfee in Belize for possession of illegal firearms, and police had previously raided his property on suspicion he was running a lab to make illegal synthetic narcotics.

McAfee says he has been persecuted for refusing to donate money to politicians, that he loves Belize, and considers it his home.

Guatemala is a canny choice to seek refuge. It has long been embroiled in a territorial dispute with Belize. Guatemala claims the southern half of Belize and all of its islands, or cayes, rightfully belong to it. There is no extradition treaty between the two countries.

A Guatemalan government source said there was "no reason" to detain McAfee because there was no legal case against him pending in the country.

Harold Caballeros, Guatemala's foreign minister, said his government was unaware of any arrest warrant and would study McAfee's asylum request once presented, saying its success would "depend on the arguments".

Guerra told Reuters McAfee would return to Belize once his situation in Guatemala was made legal, citing the fact he had crossed into the country illegally to avoid capture by police in Belize.

"He can go to the United States, there is no problem with that," he added. "We have asked the US embassy for support with our [asylum] request."

He said the asylum request would be formally presented on Wednesday.

The US Embassy in Guatemala City said in a statement McAfee would have to work within the country's legal framework, but declined to elaborate.