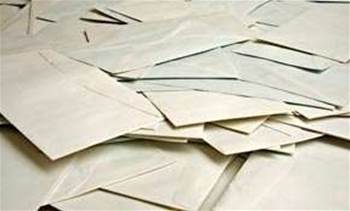 Australia's internet service providers are awaiting official invitation into a fresh round of talks to be convened by the Attorney-General's Department on ways to combat online piracy.

A report by The Australian indicates letters have been sent to "top telcos and content creators" for a new series of industry roundtables, though it appears some in the industry are still waiting.

"We haven't had an invitation yet but from talking to my network of contacts, nobody else has seen one either," iiNet's chief regulatory officer Steve Dalby told iTnews.

An Optus spokesperson declined to confirm or deny whether the telco had received a letter. "We cannot discuss or disclose our correspondence," a spokesperson said.

iTnews is awaiting confirmation from other "top" telcos and ISPs on whether or not they received a letter of invitation.

One of the proposals said to be on the table for discussion will be familiar to anyone with more than a passing interest in the court case between iiNet and the film studios.

According to The Australian, the A-G's Department is keen to attack the "supply side of piracy", potentially by blocking access to websites that are seen to facilitate copyright infringement.

This is not dissimilar to what the film industry wanted in the original Federal Court case against iiNet. The studios were clear that, should they have won, they would have sought "blocking orders" against certain websites.

"The whole website blocking thing is interesting," Dalby said. "It's likely to be fairly easily bypassed and I wonder what sort of advice the new Attorney-General [George Brandis] is getting around that".

Pirate Party Australia was more pointed in its criticism of the blocking proposal, with councillor Brendan Molloy believing it won't address the underlying issues.

"What has been proven to lower file sharing is convenient, affordable access to content, which is still lacking in Australia," Molloy said in a statement.

"This market access issue, as well as geocodes and other anachronisms of the Copyright Act, are the problems that need solving, not file sharing."

The Attorney-General's Department has been convening roundtables on the internet piracy issue over a number of years, and at one point attempted to get industry cooperation for a graduated response regime trial (commonly known as 'three strikes', where users accused of infringement could have been disconnected from the internet should they use all their 'strikes'.

iiNet notably declined to participate in the trial but has attempted to stay engaged in discussions and remains keen to be involved should a new round begin.

"We definitely would want to participate if we get an invitation," Dalby said. "I've got to point out, though, that we didn't get an invitation to the A-G Department's roundtables last time, and the only reason we attended was as a director of Comms Alliance, I took one of the two seats offered to Comms Alliance at the table.

"We'd see what we could do to wangle an invitation if we didn't get one [this time]."

An Optus spokesperson told iTnews that it would be "happy to engage with the government and work towards a solution with the industry and rights holders, ensuring compliance costs are considered."

Likewise, a Telstra spokesperson said it had "been actively engaged with Government and industry to develop a response that appropriately balance rights holders' and industry's interests with our customer's expectations of privacy. We look forward to this continuing."

Since exhausting its legal options in Australia Federal Court and High Court systems, the film studios have lobbied successive governments to take up their cause and legislate or otherwise initiate a crackdown on internet piracy in Australia.

A spokesperson for the Attorney-General's Department did not confirm or deny the new Government's anti-piracy plans.

"The Australian Law Reform Commission is currently conducting an inquiry into copyright and the digital economy," the spokesperson said.

"The Government will consider the recommendations of the final report when it is received in November 2013."