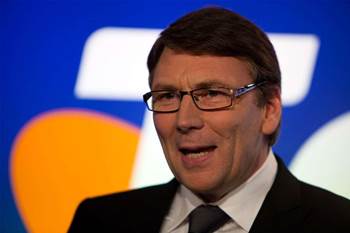 Wholesale vs retail prices under scrutiny.

Chiefs from two of Australia's largest ISPs have responded to Telstra's assertions that it would compete with them "fairly but very aggressively" for broadband customers this year.

The assertions came at a disappointing financial results announcement by Telstra last week that saw almost 10 percent of its stock value wiped in a day.

"We have been losing too many customers and we cannot allow it," Telstra chief David Thodey said. "In fact, I'm not going to allow it to continue."

Thodey put ISPs - including those that bought Telstra's wholesale services - on notice that the incumbent was going to continue a series of aggressive retail price moves it launched in recent months.

The moves sparked complaints to the competition watchdog from several ISPs, including Internode and iiNet.

iTnews asked the managing directors of both ISPs to respond to Telstra's "fairly but very aggressively" comment. Their responses are included below.

iPrimus was also asked to comment but did not respond by the time of publication.

Nobody denies Telstra's right to compete in the market, on a fair basis. We're more than happy to meet and beat Telstra on customer service, product innovation and cost management.

But where there is no wholesale competition, Telstra is using its ownership of the network to give its own retail arm an unfair advantage.

Right now, Telstra is selling a retail ADSL2+ broadband service for $49.95, as you can see headlined right here.

But Telstra charges more than $49.95 just for the port!

The port access is not the whole broadband service, it's just one component of it, and Telstra is charging more for that component than their retail arm sells the whole product for.

Imagine a state-supported monopoly wheat supplier entering the retail bread market and selling bread for less than they are willing to sell wheat to other bakeries. It's just not on.

I am confident of our ability to beat Telstra in a fair fight. In our opinion, they are misusing their market power in wholesale ADSL to give themselves an unfair advantage in retail.

That's one more reason why we need structural reform for the industry.

There are two stories wrapped up in the commentary attributed to David Thodey, regarding Telstra about price competition in fixed line broadband, and I think its worth separating those two stories clearly and cleanly.

On the one hand, there is the story of Telstra waking up to the merits of offering competitive ADSL2+ pricing via its retail arm, BigPond. Media reports say the Telstra position regarding its retail ADSL2+ competitors is that: "...it will compete with them 'fairly but very aggressively' to retain and grow its own retail customer base".

In response to this notion, the competitive retail ADSL2+ sector says "Welcome, late and last, to BigPond deciding to price at a non-monopoly mark-up on its true underlying costs" - this is a world the rest of us have been living in for a decade already. Bring it on.

However, on the other hand, there is the issue of the wholesale access price provided to access ADSL2+ ports and voice services on infrastructure owned by Telstra, through Telstra Wholesale, which are located in monopoly geographic areas.

The wholesale access price provided to the market by Telstra still contains a large monopoly mark-up against the true cost of providing wholesale ADSL2+ and voice line rental offerings.

There isn't any ambiguity here - when BigPond made these aggressive downward shifts in retail price, they should have been accompanied concurrently with a corresponding downward shift in the wholesale access price to the Telstra Wholesale network. They were not.

There is no doubt that this 'price squeeze' is due to intentional inaction - as this is the third time (at least) that this has happened since the year 2000, its not appropriate for Telstra to claim this to be either surprising nor hard to understand.

The reason why this matters is that Telstra is, and remains, the unique holder of Substantial Market Power as a monopoly provider of voice and ADSL2+ services for at least half of the entire Australian population. Because of its monopoly status, its activities fall under provisions of the Trade Practices Act through which Telstra has seen ACCC enforcement action via Competition Notices in the past.

We have seen this movie before, and we know how it ends. As for previous such occasions, we expect to see an exercise in denial - or claims that this is a situation that requires 'analysis' for some time, followed by an appropriate pricing adjustment right on the cusp of ACCC enforcement action to force the issue.

This pantomime and delay allows BigPond the maximum possible window to rescue some of its lost market share in the meantime.

It is, however, a clear demonstration that when Telstra speaks of competing 'fairly', they are using a different definition of 'fair' than I would use.

This is the sort of anti-competitive behaviour that underscores how vital it is that there is ultimately either structural separation of Telstra or the completion of the level playing field of the NBN - or preferably both.