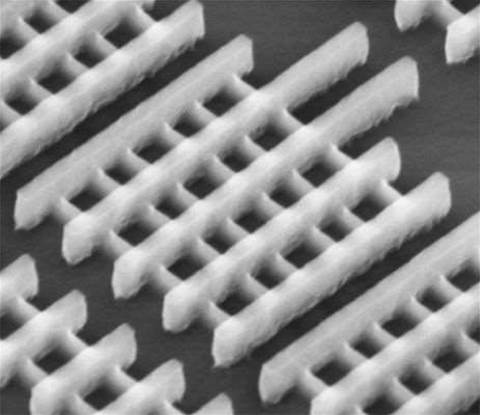 Intel has revealed a brand new type of transistor, which uses a three-dimensional design to operate in a smaller space and consume less power than existing designs.

The new transistors are called “Tri-Gate” units, in reference to their use of three conductive surfaces. The company claims the new design offers an overall 50 percent power saving over current planar transistors, including greatly reduced power leakage when in the off state. Alternatively, the new transistors can deliver 37 percent faster performance with the same power draw.

The three-dimensional design additionally allows the new transistors to be packed more densely on a silicon wafer than was previously possible, enabling a reduction in the size, and hence price, of future chips.

"The performance gains and power savings of Intel's unique 3-D Tri-Gate transistors are like nothing we've seen before," said Intel senior fellow Mark Bohr. "The low-voltage and low-power benefits far exceed what we typically see from one process generation to the next."

Despite these advances, Bohr said that Tri-Gate transistor chips would cost only around 3 percent more to manufacture than those using planar designs.

Though the Tri-Gate design was first proposed by Intel engineers back in 2002, it has taken until now to reach high-volume production.

The first chips to use the technology will be Intel's forthcoming Ivy Bridge CPUs, the 22nm successors to Sandy Bridge that are expected to arrive at the end of 2011.

Intel then plans to extend the technology across its range, including to the low-power Atom processor series and processors for mobile devices.

The cutting-edge technology may pose a threat to rival ARM Holdings, which dominates the mobile device market.

But analysts say the jury is still out on whether the PC market titan can make immediate inroads into ARM's backyard.

"With the convergence of PCs, smartphones and tablets, clearly Intel wants to get out of its core PC market. The issue is 'Can they come up with a processor that is sufficiently power efficient to be competitive in the mobile computing space?'" said Adrien Bommelaer, an analyst at Matrix.

"They are coming out with a chip that they think has a 50 percent power-saving compared to their previous generation on 32 nanometer, so it is a great step in the right direction.

"But is it enough? I don't know. Remember ARM is also improving its own power efficiency."

Intel's processors are the brains in 80 percent of the world's personal computers but the world's biggest chipmaker has failed to get into gadgets like Apple's iPad.

Energy-efficient chips licensed by ARM that conserve smartphone batteries are favoured by Apple and its competitors, and are the industry standard on mobile devices at the expense of Intel.

To extend its lead in manufacturing technology and help it catch up in the mobile race, Intel last month raised its capital spending plan for 2011 to US$10.2 billion from US$9 billion as it rushes to implement its 22 nm manufacturing as well as its next goal -- 14 nm.