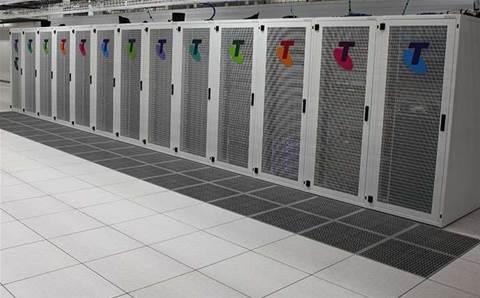 Cisco and VMware clouds to reside in Clayton.

Telstra has unveiled its new data centre facilities in Clayton, Melbourne – two years after announcing it would pour $100 million into its construction.

"Over the past two years, we have created a world-class purpose-built facility which adds more than 40 percent capacity to our current data centre capability and forms an integral part of our cloud infrastructure," said Telstra property executive director John Romano in a blog post.

The eastern Melbourne complex boasts over 2000m2 of floor space - divided between two halls - and is capable of hosting a six-megawatt IT load.

"To put this in context – it will provide the capability for every single movie ever made plus every song ever recorded to be stored and accessed from this facility," said Romano.

"Cisco is already in there and operating in data mode," said Yarkoni. "For vCloud Air, we currently have the racks ready and about to drop in the equipment. Without wanting to go into exact timings, the target is to have it available before the end of first quarter 2015."

The new centre adds to Telstra's existing presence in Sydney, and Yarkoni said the vendor had invested in both locations.

"In Sydney and Melbourne we've invested heavily in connectivity and redundancies," said Yarkoni. "We've worked hard in combining network connectivity between customers, and getting to two evolving data centres to improve our self-service capacity needs."

A statement from the telco pushed the security and environmental credentials of its new data centre complex.

As well as conventional security measures such as 24-hour security staffing and CCTV, Telstra is offering optional biometric rack access to its tenants.

"Partners have to have their own secured areas," said Yarknoni.

Telstra claims that the data centre's free-air cooling system reduces its carbon footprint and saves up to 65 percent in power costs. Rainwater is also captured and treated for cooling purposes.

A side of the complex facing a residential neighbourhood has had its original concrete "visual aspect" disguised with a green trellis design that Telstra calls "the growing wall".

The unveiling of the Victorian hub comes after Telstra first flagged its intention in Winter 2010 to consolidate its data centres. In December 2012, the vendor announced in conjunction with the state government that $100 million would be spent in constructing the Clayton "cloud centre".