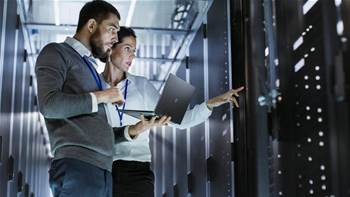 The Department of Human Services is planning to house a data lake, analytics, and machine learning capabilities inside an “elastic” private cloud currently under construction.

Head of enterprise architecture Garrett McDonald told iTnews on the sidelines of IBM’s Think 2018 conference that the private cloud would initially sit across x86 and IBM Power Systems hardware.

“We’re looking to create a private cloud across x86 and Power in the first instance, but we would love to stretch that onto Z Linux [IBM mainframe servers],” McDonald said.

The private cloud forms part of a “future state technology design” effort led by McDonald over the past two years in support of the billion-dollar welfare payments infrastructure transformation (WPIT).

McDonald said the design covered “infrastructure, security, our elastic private cloud and our PaaS layer, through to the architecture for [a] new digital experience layer as well as an enrichment layer between the core and the citizen so that we can make it a tailored experience".

“It’s been a hard slog getting to this point,” he said.

“We’re now starting to build on [a] new digital engagement layer, we’ve got a new enrichment layer starting to come to life where we [will] put machine learning and AI in place, and then we’re also starting to rebuild the core of our social welfare system.

“This is the year for me when we go from planning through to execution, and it brings me an immense sense of pleasure and pride to see the work that you’ve been pouring yourself into for many years start to come to fruition, start to engage with citizens and other government agencies, and start to deliver the value that we know it’s capable of delivering.”

The department has been revamping its infrastructure over much of the past decade, in part as preparation for the WPIT project.

It spent four years through to 2015 consolidating its data centres - a project said at the time to “work hand-in-hand with the welfare payment system” refresh.

The timing also coincided with a decision by the department “to converge on enterprise Linux as our preferred [server] operating system”, McDonald said.

“We had probably five or six different operating systems in use prior to that, and by converging on Linux it’s given us the ability to run the same operating system whether it’s on x86, Power or Z Linux [systems].

“That’s enabled us to develop a broader range of people with deep skills in Linux, and that’s really then given us a common platform upon which we can build an elastic private cloud to service our next-generation application workloads.”

McDonald said the decision to focus on private - rather than public - cloud was largely due to concerns over data protection.

“Given mandatory requirements we need to comply with within the Australian government around the use of the cloud and the sensitivity of the data that we hold, at this point we’re holding all data on-premises,” he said.

Once complete, the private cloud will be used to power workloads for a “new digital experience layer” at DHS, which McDonald said would involve running “quite a bit of predictive modelling, our data lake, and some … machine learning capabilities".

The department said at the end of last year it would save $104 million on the WPIT core transformation by deploying more commercial off-the-shelf (COTS) software.

In addition, the department is also looking to deploy open source technologies, particularly in the enrichment and digital experience layers that sit atop the new core, McDonald said.

The department revealed at the end of last year it had turned to Angular - an open source framework developed by Google - to revamp some of its web-based front-ends prior to the core transformation.

It is also using open source tools as the foundation for some of its virtual assistants, which it has built to help citizens interact with the department and staff to query Australia’s complex social welfare policies and procedures.

Those initiatives appear to be just the beginning of the department’s plans to embrace open source tools.

“When you look at the core, that’s where we have primarily COTS products, but when you move out into the enrichment layer and into the engagement layer, the further you move from the core, the greater the opportunity for innovation and to engage in positive disruption,” he said.

“Where the industry is moving with some of these capabilities, the further you move from the core, the greater the use of open source. So it’ll be a mix of COTS products and open source.”