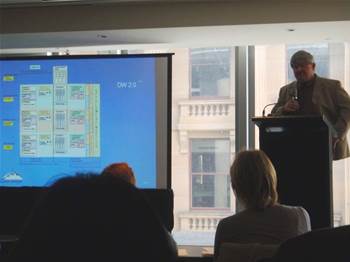 The ‘grandfather of the data warehouse’, William Inmon, is so incensed at the negative connotations of data warehousing today that he’s trademarked the name of the next version to prevent vendors from overhyping it.

Speaking at the recent DW 2.0 event in Sydney, the man who coined the term ‘data warehouse’ back in 1990 laid out his vision for its second coming, known and now trademarked as Inmon’s data warehouse 2.0 .

He accused hardware and software vendors of sowing ‘seeds of confusion in the marketplace’ by incorrectly marketing their products as being needed for a data warehouse.

“It’s sad to say our industry has gotten to that stage. I think it’s a shame that vendors who’ve used the term data warehouse don’t respect what a data warehouse actually is.”

Inmon added: “When it comes to 2.0, we’ve taken the burden upon ourselves to trademark that term. You’re not going to find it splashed across vendors’ hardware and software products.”

Inmon said that early implementations of DW 2.0 are in ‘parts and pieces’ worldwide, but that the industry should treat the architectural vision as that of ‘a city and not a house’.

He also described to delegates some of the fundamental shifts in data warehouse design between versions 1.0 and 2.0, including greater use of tiered storage, the integration of unstructured textual information into the data warehouse, and the importance of metadata .

Inmon described how he placed a data monitor on an unnamed organisation with a 70TB-sized data warehouse, only to find that one-half of one percent of the data was actually active – yet they were in the process of bringing on more disk storage to cope with growing data volumes.

“Putting all your data on disk storage is a rather strange thing to do because the irony is that the older information gets, the less people use it,” said Inmon.

“At five or ten years old, practically nobody goes looking for it.”

Inmon recommended data warehouse managers sever ties with disk storage vendors, push older information out to more cost-effective tiers and use existing disk reserves only for the latest and most used information in the warehouse.

“It serves the vendor’s interest to sell more disk storage when you’re not [actively] using most of it,” explained Inmon.

Inmon also said that companies should look out for forthcoming textual ETL tools to assist with the integration of textual information into the warehouse, as well as business metadata tools, although these are less common.

“For a variety of reasons we never gave much respect to metadata in the first generation of data warehousing,” said Inmon.

“That’s a shame, but if you were in the world of data warehousing the first time around, we had other problems that were more pressing – like explaining to people why we needed a data warehouse in the first place.

“In the early days, myself and some of the other pioneers had our hands full just trying to answer all the basic questions of the day. But if we’re at a new place in data warehousing [now], we’d better not neglect metadata a second time around.”

He added: “It would be a criminal matter to ignore metadata again.”
Got a news tip for our journalists? Share it with us anonymously here.