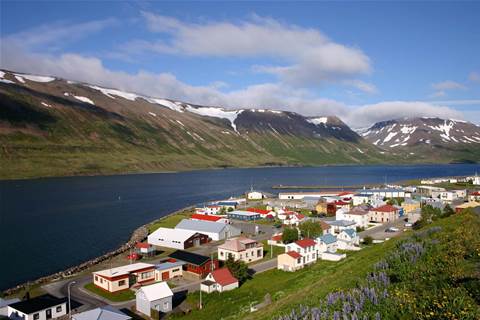 As it emerges from financial isolation, Iceland is trying to make a name for itself again, this time in the business of data centres.

The island has long been associated with hi-tech trends such as the 'Eve' video game, the genome deCode project or singer Bjork's use of software as well as its links to filesharing site Pirate Bay, the Silk Road online black market and Wikileaks.

Now it wants to capitalise on the rapidly growing data storage business. Data creation has accelerated with 90 percent of stored data created in the two previous years, according to Scandinavian research group Sintef, and data centres consume 2 percent of global electricity to keep humming servers cool.

Iceland's authorities are in the process of lifting capital controls imposed in 2008 after a spectacular financial meltdown when its three main banks, with assets worth ten times its gross domestic product, went bankrupt.

Its massive energy generating capacity thanks to hydro and geothermal power cannot be exported due to the island's remoteness, so it produces five times more electricity than its 320,000-strong population needs - and all of it is renewable.

It is hoping its cool climate and cheap reliable power can entice data centre operators, offering them dramatically lower costs and a recently-passed tax incentive.

Although the country has not yet attracted big Silicon Valley names, smaller operations have already arrived.

It has five data centres including one at a dismantled NATO base operated by Verne Global, whose top publicly named client is carmaker BMW, and the government is campaigning to attract more.

"When BMW said they paid 83 percent less for operating their data centre on Iceland than in Germany, [interest] really picked up," said Einar Hansen Tomasson, who works to woo data clients through a government-backed program, Invest in Iceland.

A study by consulting firm BroadGroup in 2013 showed the island is cheaper than Germany, Britain and the United States when looking at costs over a 10-year span.

These days, anything anyone does on a computer generates reams of data - to be precise, 5 quintillion bytes globally per day.

But the storage of someone's emails from 2003 requires a very different service than retrieving NASA's processing of New Horizons's data from near Pluto some 4.7 billion miles away.

High performance computing is the most power-hungry kind. It is this kind of data storage that Iceland is best suited for, analysts said.

"It's a big problem for a lot of commercial customers and some universities who run high performance computer environments in Europe, because the advanced computers are becoming so big and so energy hungry," said Giorgio Nebuloni, associate research director at IDC.

BMW requires huge amount of power for processing data: the smallest change to a wing mirror will change the aerodynamics of an entire car so "they don't care if it takes the data hours to come back to Germany", Nebuloni said.

But that is one of Iceland's drawbacks -- its remoteness means some types of data operations are ill-suited for the island, such as high frequency trading, famous for such speed that data centres need to be located within a block of operations.

And Iceland has yet to attract Apple, which has centres in Denmark and Ireland, Google, which opted for Finland, or Facebook, whose facilities are in Sweden.

None wished to comment on the location of future data centres, citing privacy and security reasons, while data centre operators are equally secretive about their clients. Microsoft says its deliberations on centre locations include 35 weighted criteria.

While analysts suggest remoteness as well as a small workforce could be behind Iceland's failure to attract big names for now, Invest in Iceland's Tomasson has a different theory.

"I think this is a game of incentives. Many countries are giving incentives to companies who decide to locate in the area," he said.

Danish finance paper Borsen, for example, reported earlier this year how Danish tax authorities and the foreign ministry highlighted tax incentives and how to use them to Apple before its decision to place a centre in Viborg in Denmark.

Microsoft, meanwhile, said it would build a US$250 million data centre in Finland, a promise which the government said would reflect good corporate responsibility after the tech giant cut thousands of jobs from Nokia's former mobile phone business.

In June the Icelandic parliament agreed to offer investors in the country incentives that include a profit tax cut to 15 percent from 20 percent, a 50 percent real estate tax relief and to let companies depreciate assets completely.

"I think these new incentives are going to absolutely help us," Tomasson said.

For its part, Denmark plans to lower its corporate tax rate to 22 percent by 2016, and offer expat workers a reduced income tax of 26 percent for up to five years.

Data privacy is also becoming increasingly important to businesses, as underscored by the theft and release of details of people signed up to the Ashley Madison infidelity website.

In Iceland, privacy protection and transparency about how data is used has become a big issue since the grass-roots Pirate Party, with links to Wikileaks, became a top political force.

"Countries with restrictive data privacy regimes, such as Iceland, may be initially challenging to operate in from a regulatory point of view, but the data protection measures offered are highly attractive to customers who wish to maintain control over who has access to their data," Christopher Sherman, analyst with research firm Forrester, said.

Analysts say building data centres is a big decision and it is commonplace for options to be deliberated for 5 years, so Iceland has a good chance of becoming the go-to location.

"I think there is certainly an opportunity [for Iceland] – especially for workloads such as technical computing, high performance computing and lightweight consumer eeb applications," IDC's Nebuloni said.