IBM says it won't pressure its customers into the cloud 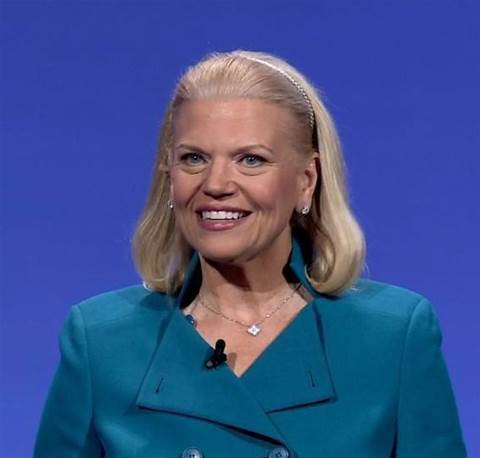 But the tech giant is strongly pursuing cloudy agenda.

IBM has promised its customers that it won't make them feel bad if they're not ready to jump into the public cloud, but the technology giant has made it very clear that's where it sees its future.

One of the world's oldest and biggest IT companies today offered a sympathetic ear to regulated industries like banking and healthcare that don't feel they’re ready to hand over control of their servers.

The inventor of the mainframe said legacy technology - which accounts for a big chunk of IBM's revenue - still played an important part in the enterprise.

“Those are your accumulated assets. You don’t throw that away.”

The company promised its most risk-averse customers that it wouldn't evangelise to them on the public cloud.

Rometty claimed IBM's tech underpins almost all of the world's biggest banks, most of the globe's communications providers and retailers, and nearly all its hotel reservations and credit card transactions.

“As many as 44 percent of enterprise workloads are on - and will likely remain on - dedicated servers,” senior vice president for public cloud Arvind Krishna said.

“And that’s ok. We believe you should never have to fit your cloud into a square hole."

But actions can speak louder than words, and IBM's announcements at its cloud conference spoke volumes about where its direction is headed.

Cloud collaborations with Veritas and Red Hat, cloud integration tools, more attractive cloud pricing, a cloud-based enterprise-ready blockchain, and a partnership with Wanda to bring IBM's public cloud to China indicate IBM is very much in the cloud game to win.

It also brought Salesforce chief Marc Benioff on stage to discuss the pair's Watson and Einstein collaboration, and trotted out a customer to extol the benefits of its public cloud.

“You need innovations that are going to continue to come out, and you need a cloud that will keep taking them on,” Rometty said.

“There’s a long pipeline coming, and that’s what an enterprise cloud does, it embraces that.”

She said public cloud providers needed to prove to customers both that they are more secure than on-premise, and that they have a strong pipeline of innovations incoming.

IBM's cloud business makes up around 17 percent of its revenue at the moment.

It is lagging way behind market leader Amazon Web Services, which Gartner estimates is a big as the all the other public cloud providers several times over.

It has also yet to catch up to Microsoft or Google behind AWS.

But IBM has made it abundantly clear that is is betting on cloud, alongside artificial intelligence, analytics, and blockchain, to reverse the 19 consecutive quarters of revenue loss it has suffered through.

“Our job is to really help prepare you for what you will become,” Rometty said.

What that means for its steadfastly on-premise customers remains to be seen.

Paris Cowan travelled to InterConnect 2017 as a guest of IBM.