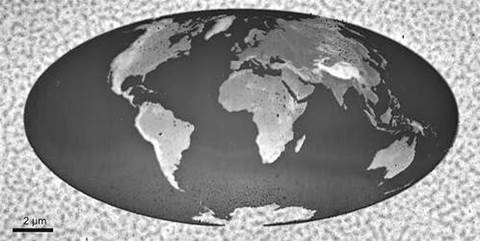 IBM researchers have developed a manufacturing technique capable of etching 1,000 three-dimensional world maps on materials the size of a grain of salt.

The technique involved a tiny, silicon 'scanning probe' that measured 500nm (nanometres) long and 5nm thick and was heated above 330 degrees Celsius.

As it came in contact with substrate materials -- called resists -- the probe would cause the material to evaporate, thereby etching patterns on the material.

Reaching a resolution of 15nm, the technique could enable future nanoelectronic devices to be produced more cheaply and efficiently than state-of-the-art electron beam lithography (EBL) systems.

According to IBM, potential applications ranged from fast prototyping for CMOS nanoelectronics to fabricating shape-matching templates for self-assembling nano-rods or nano-tubes.

But the real breakthrough was its ability to create complex 3D patterns and structures, which could enable new micro-optic devices, he said.

"We believe that the fact that you can do 3D patterning will open up applications that we haven't thought of before," Despont told iTnews.

Ian Boyd, who is the director of the Melbourne Centre for Nanofabrication (MCN), explained that EBL was unsuitable for the mass manufacture of nanotechnology as it could only target a small area at a time.

When it officially opens in July, the Centre will house a $2.5m EBL tool said to be the first of its kind in Australia.

"The resolutions available for EBL are of the order of 10nm at the moment," Boyd told iTnews.

While several instances of the simpler scanning probe technique could be run in parallel to pattern larger areas of substrate, the same could not be said for EBL as nearby electron beams would likely interfere with each other.

Boyd said manufacturing nanoelectronics with EBL would be akin to "ploughing a field with a knitting needle".

Meanwhile, Despont said IBM's technique would not be mature enough for its commercial effects to be apparent for at least five years.

The technique was two years in the making and represented a collaborative effort between Despont's team of physicists and chemists who developed the substrate materials at IBM Research in Almaden.

In the near future, the researchers would focus on making the technology available to universities and other corporate research laboratories. They were in discussions with a European manufacturing company about commercialisation.

"We believe that if this technology has a future, we will need to have a large research community working on it," Despont told iTnews.