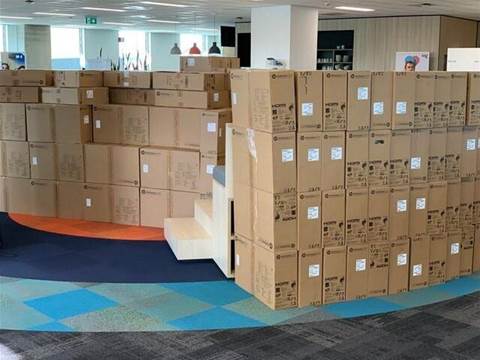 Also paid $400 per person to help with home office setups.

Insurer IAG used several strategies to equip staff to work from home, from a ‘tech drive-thru’ run in New Zealand to one-off $400 payments to staff.

Executive general manager of enterprise finance and operations Suzanne Storrie - who is also the crisis director for IAG’s COVID-19 response team - told a SAP virtual summit the insurer had 97+ percent of people working from home.

“From a technology point of view, that meant we were in pretty good shape when the crisis really hit,” she said.

“That wasn't to say it was easy. The Technology team worked really hard to make those moves happen, particularly of employees who were used to working in an office space or other worksite environment and didn't have a laptop, so making sure that we got them laptops.”

Storrie said IAG decided early in the piece to support employees with a one-off $400 payment - a strategy also employed by SAP in A/NZ - “so that they could help set themselves up to work from home.”

“That helped to an extent,” Storrie said.

The company also prioritised equipping customer-facing teams for the transition, making sure they “had the tech kit that they needed to be able to continue to work, and getting them set up working from home.”

She said that extended to “having kit available and staff being able to drive in to the office and pick up their kit so that they could then work from home”.

IAG revealed this a couple of weeks ago in a LinkedIn post, showing walls of boxed HP laptops that were being distributed to staff via a ‘tech drive-thru’ arrangement.

“In 24 hours we packed, prepared and deployed hundreds of work from home bundles,” the company said in the brief post.

“Each employee would drive in at a scheduled time, pop the boot and have the kit placed in the car. Social distancing rules were followed at all times.”

Storrie said the Technology team also stood up a temporary IT helpline to support staff when setting up their equipment at home.

On the applications front, Storrie said that remote working teams were making use of existing Cisco Webex and Microsoft Teams setups.

She also said that some teams had set up spaces within WhatsApp to message each other quickly and to help stay connected.

Storrie said IAG’s COVID-19 response team was set up virtually over a weekend and used several Atlassian tools like Jira and Confluence to stay on top of the company’s wide-ranging response activity.

“In order to make sure that we had every action, and risk and issue tracked, we use Jira, and then we also have a Confluence [project collaboration] site to track artifacts as well, which we've been doing in real time,” she said.

Technology would also be crucial as IAG modelled future work scenarios for once lockdowns began to lift.

Storrie said IAG started thinking about this in parallel with enabling staff to work from home.

“At one point in time a couple of weeks back we were still focused on making sure that we were stable in terms of people working from home, but we'd already turned our minds to how we would come back and return people to work sites,” she said.

Storrie indicated the company is considering which teams might be brought back to office environments first, as it explores what the future of work at IAG will look like on an ongoing basis.