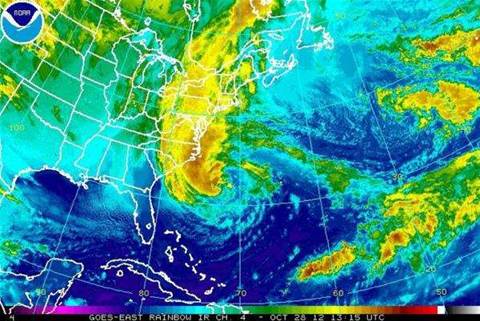 Satellite image of Hurricane Sandy heading towards the US. Source: NOAA

Hurricane Sandy has blown Google's Nexus launch event tomorrow in New York out of the water, as the tropical storm is expected to rip through the East Coast of the US with winds in excess of 160 kph.

Sandy has swept through the Carribean killing 65 people and causing extensive damage.

The Associated Press reported that emergency evacuation of lower Manhattan and other low-lying areas of New York City has been ordered by mayor Michael Bloomberg.

Wired reported that Google emailed invitees to say the event has been cancelled: “We are cancelling our Monday morning event in New York due to Hurricane Sandy.

"We will let you know our plans as soon as we know more. Stay safe and dry, The Android Team.”

Meanwhile, pictures of a new, Samsung-made tablet, the Google Nexus 10, have been leaked. These were published by BriefMobile over the weekend, which reported the Nexus 10 has very high specifications.

These include a Samsung Exynos 5250 dual-core processor based on the ARM Cortex A15 design running at 1.7GHz and a Mali-T604 graphics unit driving an ultra-high resolution 2,560 by 1,600 pixel 10.1 inch screen.