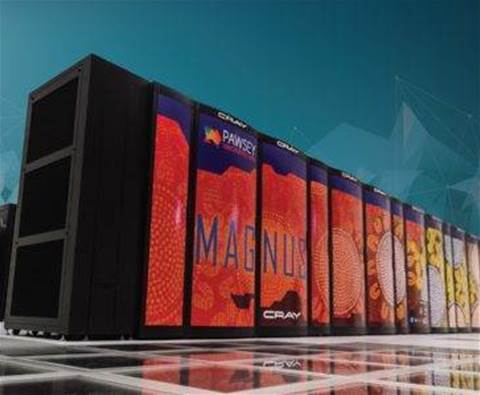 The new machine will be built with HPE Cray EX hardware capable of delivering up to 50 petaFLOPs - around 30 times more compute power than its predecessors Magnus and Galaxy.

Pawsey executive director Mark Stickells told iTnews the heterogeneous architecture brings the CPUs and GPUs together “in a really tightly integrated way, with a high speed interconnect to move large volumes of data around” using the HPE Slingshot interconnect.

The as-yet-unnamed machine will be commissioned in two phases, with the first slated for the third quarter of 2021 comprising a two-cabinet system providing a 45 percent increase in raw compute power compared to Magnus and Galaxy.

The remaining six cabinets will be delivered in the second phase, which is scheduled for the middle of 2022.

The $48 million tender was managed by the CSIRO, with HPE winning out on three points: “energy efficiency, the integration of the hardware and software systems, and also a commercial decision around its price,” Stickells said.

“It's going to be about 10 times more efficient than our current system, and deliver about 30 times more compute power so we'll be able to service a lot more of the Australian research community and collaborate more widely, but do it with a system that we believe will rank in the very top tier of green supercomputers in the world.”

The existing geothermal cooling system at Pawsey, which was specially developed by the CSIRO for the centre when Magnus was commissioned, will further reduce the energy cost of the new system and is offset by a 118kW solar photovoltaic system.

The supercomputer upgrade will allow researchers to undertake even more ambitious projects, such as in the fields of artificial intelligence, radio astronomy, climate modelling and energy systems.

“It's going to enable the scientists who said ‘I want to I want to apply for 10 million hours because I've got this big problem’," Stickells said.

"Where previously with Magnus, we could only give them a million hours or 2 million hours, we'll be able to scale up with their aspirations and the challenges of their large data sets and the increased requirements that they have and provide them with more support.”

Dr Chenoa Tremblay, a postdoctoral fellow in dark magnetism at the CSIRO, said the upgrades will drastically reduce the timeline of her research, which uses Pawsey’s existing supercomputers to scan more than 10 million stars and analyse hundreds of terabytes of data searching for molecules that could point to extraterrestrial life.

“Doing this on my laptop would take 25 years, so having the power of the new supercomputer will help bring our research timelines from years down to days, giving us the power we need to analyse hundreds of thousands of images quickly,” Tremblay said.

The refresh will also support further developments such as real-time processing with the Square Kilometre Array (SKA) project, which Stickells said is due to start hitting its stride in the middle of the decade.

“We're not just a compute facility generating data and insights, but we're also receiving high volumes of data and processing in real time and that's part of the point of difference of Pawsey," Stickells added.