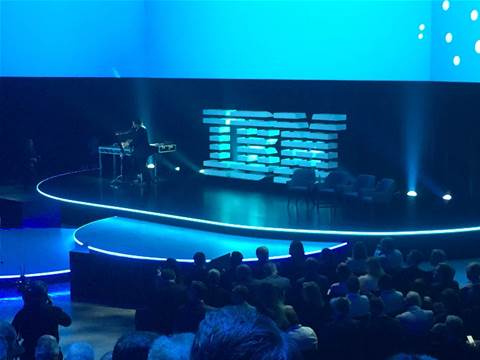 Westpac’s chief information officer Craig Bright has continued to ratchet up pressure on multinational vendors selling into Australia, warning that a whopping 30 percent mark-up against standard US pricing just doesn’t cut it with Australia’s oldest bank – and he’s holding the shears.

In a coordinated tag-team drop on the major vendor community – the showcard of which was Westpac CEO Brian Hartzer's live in conversation with IBM CEO Ginni Rometty (who was inexplicably besieged by a rogue insect live on stage) – Bright also let fly with some candid thoughts.

They are, in short, his battle plan to assert technological supremacy, sorry, leadership in the local sector and do so by being world class.

Whether you call it a box trifecta or a Holy Trinity, Bright is betting there are three essential ingredients that will cough-up for Westpac.

“With the world constantly changing, I see three imperatives for Westpac in the years ahead: having future-ready platforms; industry-leading maturity and a performance culture,” Bright told Westpac’s corporate blog.

As we mentioned just earlier, Bright – a year on into his job – has put forward a plan that concurrently completes existing major builds but, also, future proofs the big red buggy by cutting the anchor chain to … major builds its been tied to for years.

“Future ready platforms essentially enable you to engage digitally in real-time with customers in a way that’s personalised, intelligent and autonomous; adapt quickly; and operate and scale efficiently,” Bright extolls.

“It requires architecture that’s customer centric, real-time, modular and cloud ready, in stark contrast to the product-centric, batch, monolithic and proprietary architectures that have existed in the industry for some time.”

Batch … monolithic … proprietary. We would never suggest Bright is inferring some vendors know decent a lock-in when they see it.

Westpac’s stack is some of what Bright aspires to. It’s made solid gains over the past year, albeit with a few skinned knees as it picked up pace.

Some major embarrassments, true, but the propensity to learn appears to be there.

And there is product coming out of the pipe fairly quickly, which is important.

“This goes to our updated thinking around cloud following technology and regulatory changes over the years, our focus being on both public and onsite environments.”

One thing Bright made clear in his interview with iTnews last Friday is that some established infrastructure, namely Westpac’s Hogan-based mainframe transactional rig that runs on IBM’s Z-series, still has some miles left in it.

Heritage or legacy, big, fat distributed architecture still cuts it in the same way that Detroit Diesel remains under the hood of most prime movers still ploughing our highways, despite dreams of an autonomous and electric fleet.

But the design and testing of a new model architecture, namely an equity investment in 10x, is underway, and Westpac wants a say in where it goes.

Asked the dollar amount, Bright just says “no” – though it’s clearly not a material threshold given the absence of an ASX announcement.

“It’s this year, in the last couple of months, I’ve done it,” Bright says.

“The benchmarking that we've been doing, which has been across all our major providers, IBM being one of those, IBM was one of the firms that we work with and said, ‘OK let's look at pricing versus …globally competitive pricing.'

“Actually, they've been a good partner and work quite constructively with us.

“So we've got to a price point for the scope of services they're providing that we believe represents good competitive pricing, as we have with some of our other key partners.”

Bright says that as Westpac moves “to a utility infrastructure… we're actually looking to drive down infrastructure costs overall.