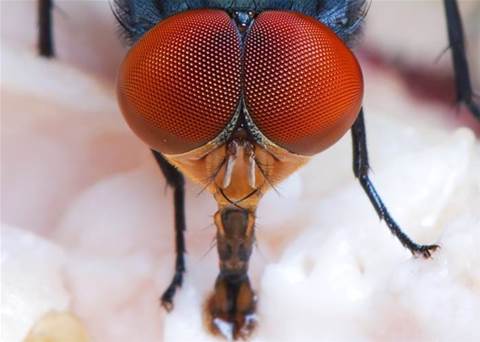 Much buzz about blockchain.

The planning must have been on a military scale.

An arena sized hall, a swag of blue chip customer CEOs, and a battery of rock-star effects and props ranging from giant screens to oversize 3D brand logos – all thrown into chaos by an insect that just wouldn’t take no for an answer.

There's a reason they call bugs bugs; they just don't go away.

After years of talking-up the need for corporate resilience, IBM’s chief executive and chairperson Ginni Rometty on Tuesday put words into action amid being relentlessly pursued, live on stage by some kind of local flying critter determined on a nibble.

When you’re the head of one the world’s biggest and oldest technology companies, dealing with bugs in customer systems is par for the course, especially when deals go back decades, often to the era of Thomas Watson and early mainframes.

And, if we’re being candid, IBM bugs have occasionally caused headaches thanks to misbehaving systems like the Census, Queensland Health payroll and outsourcing deals dating back to the 1990s that have made even the most hardened bankers wince.

And every so often, especially after a bit of a rough trot, it pays to make a trip to the colonies to soothe frustrations at major accounts and show some top level commitment that puts customers on the same pedestal as the chief of one of the West’s great tech powerhouses.

Accompanied by fellow IBM customer Woodside CEO Peter Coleman, Hartzer and other key customers sat and marveled awkwardly as the oversized insect hovered over and pursued an increasingly bemused Rometty.

“I’d like to say it’s a flying frog … but it’s a flying bug,” Rometty quipped in reference to the insect attack and IBM’s coincidental participation in national frog ID day, where’s its helping distil data from amphibians calls to get a count on species.

“I’m sure he’s interested in scaling AI”, IBM’s CEO continued as the airborne pest doubled down on dive bombs in between attempts to paint a picture of a world made better by blockchain.

After a panel discussion of predictably big issues, moderated by the ABC’s 7.30 anchor Leigh Sales, Rometty returned to centre stage.

And so did the bug, unwaveringly pursuing its prey.

“I think originally people thought with blockchain, gee, I'm going to go build my own, you have some of your own individual applications …” Rometty persevered as the hostile insect launched another killer dive to halt the IBM CEO mid-sentence.

“This particular bug must like my perfume,” Rometty mused out loud.

“Unless you sent it over to me?”  she jested to Westpac’s boss Hartzer, who duly returned the compliment.

“I thought IBM didn’t have any bugs,” Hartzer returned, prompting the auditorium roof to roll in the aisles with laughter.

Which should have been the end of the matter, especially as the Sydney’s International Convention Centre’s elite flying intervention squad for unauthorised insect intrusions started to assemble nervously on the event’s sidelines.

We’re not entirely sure what happened during the brief set-change break – it was dark – but clearly a hunt was on.

It was then over to IBM’s senior vice president for global markets, Martin Schroeter to brave the stage where he prepared to quiz Qantas’ group CIO Susan Doniz on all things AI, cloud and airborne.

“So Susan, I know Qantas has a goal…” Schroeter offered before the Kamikaze insect closed in on him, again laying them dead in the aisles.

We’re not completely sure what words Doniz offered as comfort, but it appeared to be something vaguely along the lines of being bug free. Fair enough.

Who knew blockchain could be so much fun.