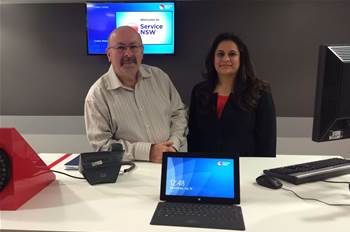 Service NSW staff from the CEO down are glued to live performance dashboards measuring the accrued time and quality performance ratings of all 18 ‘one-stop-shop’ service centres now operating across the state.

Service NSW represents the manifestation of former Premier Barry O’Farrell’s service reform vision, where customers can access government transactions from a single shopfront, phone number or website in an environment that competes with its private sector peers in terms of service quality.

In an interview with iTnews, Service NSW operations chief Serdar Avsar and his colleague Rachna Gandhi said the constant stream of business intelligence - updated every two minutes - is critical to the culture of the growing organisation and creating a sense of "healthy competition" between geographically dispersed shopfronts.

From the moment a customer steps into a Service NSW centre, calls the phone number or checks in online, every facet of their experience of the service is being assessed.

"Once the customer walks into a service centre and greets the concierge or takes a ticket, we have that timestamped," Avsar said.

"Once we call them to the desk we know exactly how long they have waited and we can also see how long that service transaction takes to be completed. Then we ask for customer feedback.

Big screen monitors displaying all the metrics are hard to miss in Service NSW's CBD HQ.

The data is generated from the the agency’s customer flow management tool, an intelligent queueing system that directs customer traffic based on the expertise of counter staff, the estimated time of their transaction and resourcing levels.

Gandhi, who is executive director in charge of Service NSW’s digital channels, said the dashboard was not intended as a "performance management stick".

"It is a tool that is used to enrich our culture," she said.

Gandhi said she regularly hears of service centre managers consulting with peers in other regions who are rating highly against a particular transaction or average service time.

"It has led to a learning culture. We are not letting the technology dictate what we do, we are using the learnings to influence our practices."

In a recent case, she said, staff from a service centre who were particularly adept at processing Fair Trading transactions were sent to other locations to pass on their techniques in training sessions.

"It is a very intelligent queue management system and not all service centre managers had fully understood how it actually works," Gandhi said.

"So we found in certain service centres they were managing the added complexity of longer-duration transactions much better than others and it led to us launching a training course with all our service centres to show them how the queue system actually works."

This culture of iterative improvement has also filtered through to the way Service NSW manages its enabling technology - slowly linking agency systems through portals and virtual desktops to see how customers take to each process rather than implementing a ‘big-bang’ back office integration.

The main systems Service NSW staff deal with is the Roads and Maritime Services’ DRIVES vehicle licensing database - which accounts for about 40 million transactions every year - and the range of functions under the umbrella of the Government Licensing System (GLS), which accounts for another seven to eight million.

"We had to be pragmatic because we were given a challenging timeline in which to do a lot. So we created a virtual system. Effectively today our operators when looking at one of those screens is toggling from DRIVES to GLS," Avsar said.

"If an agency is not in GLS, such as Births, Deaths and Marriages for example, we develop an environment where we can quickly build some sort of transactional portal for that particular agency that we are able to execute in service centres, in the call centres or online. That is the approach we are taking in this first tranche of work."

But Service NSW has been less staggered in its approach to cloud. Avsar said he believes the organisation is one of the first in the state to deploy the Genesys cloud infrastructure, allowing it to distribute surplus load between its geographically distributed contact centres. The technology is hosted by NEC.

He also thinks Service NSW is likely the first NSW Government agency to roll out Windows 8 and Office 365 to all its head office staff (about 100), who access the tools from a fleet of Surface Pro tablets.

"That technology allowed us to expand fairly quickly without a significant investment in testing," he said.