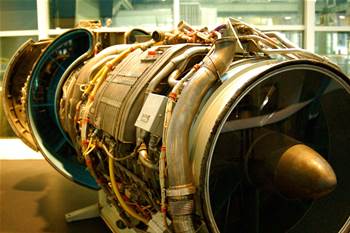 Industrial giant GE will run its first-ever hackathon in a few weeks, looking externally for help to solve traditional problems in the industrial sector with technology while also bolstering the company's digital ambitions.

GE is a global industrial machinery manufacturer producing everything from jet engines to wind turbines.

In recent years the company has spotted an opportunity to couple its machines with software, and its US$6 billion software division is now growing by 20 percent annually.

Rio Tinto's RTVis system is said to reap up to half a million dollars worth of value each year - by providing a 3D display of the remote pit environment and allowing operations centre staff to relay faster instructions back to the mine.

Given their operational scale, making industrial players more efficient by even just 1 percent could result in a huge financial benefits.

GE hopes to make that possible through software and its 'industrial internet' portfolio.

In the process, it wants to become one of the top ten global software companies - with US$15 billion in revenue - by 2020. It established a new digital division in September in hopes the dedicated focus will allow it to reach this goal.

Despite employing a 15,000-strong army of software developers worldwide, the company is turning to external sources to attract the innovation it needs to power the ramp up of the industrial internet.

Later this month GE will host two hackathons in Sydney and Melbourne, it's first foray into this flavour-of-the-moment approach.

It wants to work with start-ups and enterpreneurs with innovative ideas for the utilisation of technology in the industrial sector - whether that be for mining, healthcare, transport, or power and water.

"Australia is a key area for this digital business because of the market conditions - commodity prices are low, operating costs are high, so there's a huge focus on getting more out of equipment, whether that's through reducing downtime, anticipating problems, or driving things like fuel optimisation," Sheppard said.

"There's an enormous amount of talent in Australia, and inevitably a lot of that needs a channel and investment to thrive."

Participants in the hackathon will be asked to come up with solutions in four key areas: remote worker safety, optimising energy usage in power and water, replacing paper-based processes for railway maintenance staff, and a central ledger for engineer licensing information in the healthcare sector.

"In the industries we play in - everything from aviation to healthcare - asset tracking is a huge issue," Sheppard said.

"In the healthcare space finding equipment in hospitals is a big challenge - the amount of equipment that gets lost is huge.

"In the aviation space we work with Qantas around fuel efficiency services, generating a huge amount of data so by the time the plane lands we can be on the ground and replacing parts before they break."

GE's aim in the hackathon, according to Sheppard, is to foster relationships with entrepreneurs and start-ups in the industrial sector, and hopefully wind up with a product it can employ commercially.

Participants in the program will retain ownership of any IP produced, Sheppard said, and will be given advice on how to commercialise their product. Hackathon attendees are free to pitch their product to whoever they like, he said - including GE's competitors.

"We recognise we don't have the all the answers internally. The conventional models of the way we work are changing .. and we're not necessarily going to find all the answers we need from the people working for us 9 to 5 every day," Sheppard said.

"As we grow our digital footprint it's a great way for us to access these communities, and for our own internal staff to gain exposure to the growing start-up community.

"It's as much about the process and exercise as the tangible outcomes of the project."

GE is offering prizes for those who place first, second or third. Winning teams can choose from $5000 worth of AWS cloud hosting, a Microsoft Surface 3 per team member, or a Samsung S6 per team member.

Potential employment is also on the cards for particularly exciting entrepreneurs.

"This is the first time we've done it. It's a bit of an experiment," Sheppard said.

"We're going to try it, we mightn't have all the answers and there might be some bumps in the road, but we'll give it a go and learn things from it."