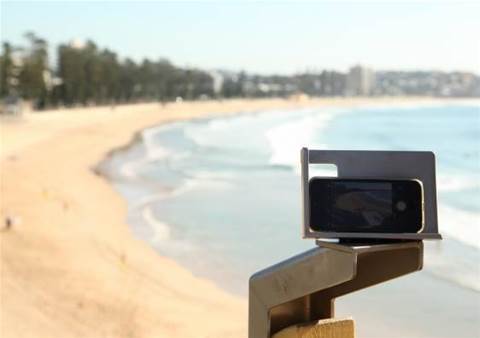 Engaging the public in coastal management.

Photos sourced from social media are being compiled to reduce the cost of figuring out how beaches are responding to changing weather, wave conditions and extreme storms.

A collaboration between engineers from the NSW Office of Environment and Heritage and the UNSW Water Research Laboratory found that crowdsourced photos produced insights nearly as accurate and effective as professional shoreline monitoring equipment.

Algorithms then analyse the photos - which are all taken from the same height, angle and direction thanks to the mounts - to track the shoreline positions over time, helping researchers and the community understand why some beaches are more resilient to changing climate and wave systems than others.

Such information will be crucial to understanding how erosion might impact on communities and how best it might be mitigated to avoid costly property damage or the loss of waterside conservation areas.

“The data we have collected so far has revealed some very interesting patterns that waves and tides have caused. Some sites have seen the coastline fluctuate by up to 50m back and forth, whereas at some nearby sites, the same coastline has remained stagnant,” he said.

“This type of information is critical to be able to help predict how the coastline changes in response to changing waves and storms.

Since the initial launch of the project two years ago, almost 1000 participants have uploaded more than 2,500 images for use in the project. Camera mounts have also been installed at an additional two sites as the scope of the project expands.

While the success of CoastSnap was partly buoyed by the relatively high number of seaside pictures people post to social media, the low quality of the images didn’t negatively affect the outcome.

“To collect data about shoreline change over time, we previously had to rely on expensive monitoring equipment or exhaustive fieldwork to gather data by hand,” Harley said.

The cheap price and low level of skill needed for contributors to submit photos has the team behind CoastSnap hoping the solution can be rolled out to areas that previously lacked rigorous testing or funding for such activities.

Additional locations in NSW include Cape Byron on the North Coast and Blacksmiths Beach in Lake Macquarie.

ForgeRock for Australia’s Trusted Digital Identity Framework (TDIF)
By Matt Johnston
May 22 2019
7:00AM