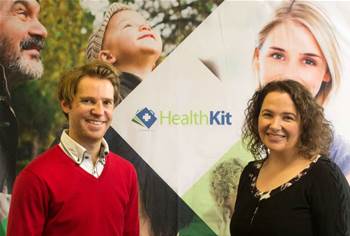 Apple's newly-announced HealthKit service might have health professionals and developers curious, but an Australian start-up is fuming at having its business name ripped off.

CEO and co-founder Alison Hardacre first heard of Apple's actions at 4:00AM Tuesday, during the WWDC keynote.

"I had a friend from a previous business who emailed to ask 'have you had a secret deal with Apple? What's going on?' This is the first I heard of it."

Hardacre quickly checked her computer to find that Apple had appropriated the name of her start-up HealthKit.

"I was a little bit shocked. I went to Google Analytics and saw the web stats. Our traffic was ten times what it usually would be."

Within an hour Hardacre was talking with lawyers, considering the company's options.

"It's been very disappointing for myself and my business partner. Most start-ups feel that the business is their baby. We've grown this business over the last couple of years."

Hardacre and her business partner purchased the .com in early 2012 and also own a number of other HealthKit domains including .biz, .info, .biz, .me., .co, and .mobi.

HealthKit had filed for a trademark in Australia, which under the Madrid protocol gives the company rights even in the United States.

They are as yet unsure if Apple has filed a trademark for HealthKit.

Hardacre said if it can be proven that Apple filed for a trademark for the same name in any jurisdiction, the company has "knowingly set up a situation where there is a business trading with the name already that will be harmed by their actions".

"Even an intern would know to do a quick five-second check on a browser to check the URL [before naming a service]. Is it that they’re so big that they don’t need to think about other people?" Hardacre asked.

The company was recently approached by investors in Silicon Valley and New York, impressed with the HealthKit model, but Hardacre fears it might be all "up in the air" owing to brand confusion.

Already, Hardacre has noted searches and social media posts stating that "HealthKit will fail", and is concerned that anti-Apple sentiment might rub off on her own business.

"I was absolutely shocked that nobody from Apple contacted us. It's so disappointing," Hardacre said.

Apple has some form in using names that it doesn’t own. Most famously, it reached a settlement with Cisco over the name iPhone.