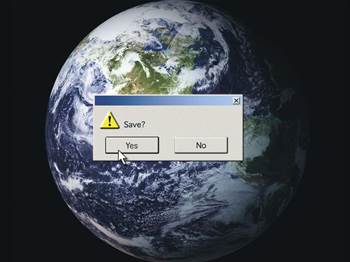 The annual CeBIT technology show kicked off in Hanover today with global warming firmly at the top of the agenda..

Ernst Raue, a board member at Deutsche Messe, which organises the event, highlighted a broad international line-up of contributors bringing together all the key activities of the ICT industry.

Exhibitors will be presenting services, products and innovations addressing energy efficiency in the ICT industry at CeBIT's Green IT Village.

"We want to show how the application of ICT solutions can save power, and that investing in green IT is an obvious step for anyone interested in reducing energy costs and contributing to climate protection."

Taking centre stage at the Green IT Village is the green networked office display, which enables a direct comparison of energy efficient applications in the work environment with customary applications.

The model demonstrates the enormous energy resources currently consumed in the average office, and shows how the same office operations could be performed with energy efficient ICT solutions.

"The aim is to show every single visitor that they can make a personal contribution to climate protection and cost reduction," said Prüser.

A total of 5,845 exhibitors from 77 countries will present products, solutions and innovations for the ICT industry at this year's show. The exhibitor stands and special displays cover an area of 241,000 square metres.

Raue said that CeBIT remains an international event, with 3,000 exhibitors from outside Germany helping to maintaining its function as a flagship trade show for the entire digital industry.

However, exhibitor numbers are down from 6,153 at last year's show, which Raue attributed primarily to economic factors.

"The weak dollar has dramatically pushed up costs for exhibitors from important ICT countries," he said.

"On top of that, exhibitors from a number of countries are now liable to pay German VAT at the full new rate. Despite the increased appeal of CeBIT, we have not been able to absorb these price increases."

Another factor affecting the show, according to the organisers, is the changing IT manufacturing landscape.

"China has overtaken Taiwan for the first time in the history of CeBIT as the largest foreign exhibitor region with 500 exhibiting companies. Many hardware manufacturers are shifting their production from Taiwan to China," said Raue.

France has a record participation this year as the event's Official Partner Country. "150 companies from the French ICT industry are coming to CeBIT 2008. The audience response to CeBIT in France has been fantastic," said Raue.

The show will also play host to the German-French IT Summit on 4 March, which is due to be opened by Michael Glos, German Federal Minister of Economic Affairs.
Got a news tip for our journalists? Share it with us anonymously here.
Copyright ©v3.co.uk
Tags:
2008atbillcebitgreenhardwareitthetops